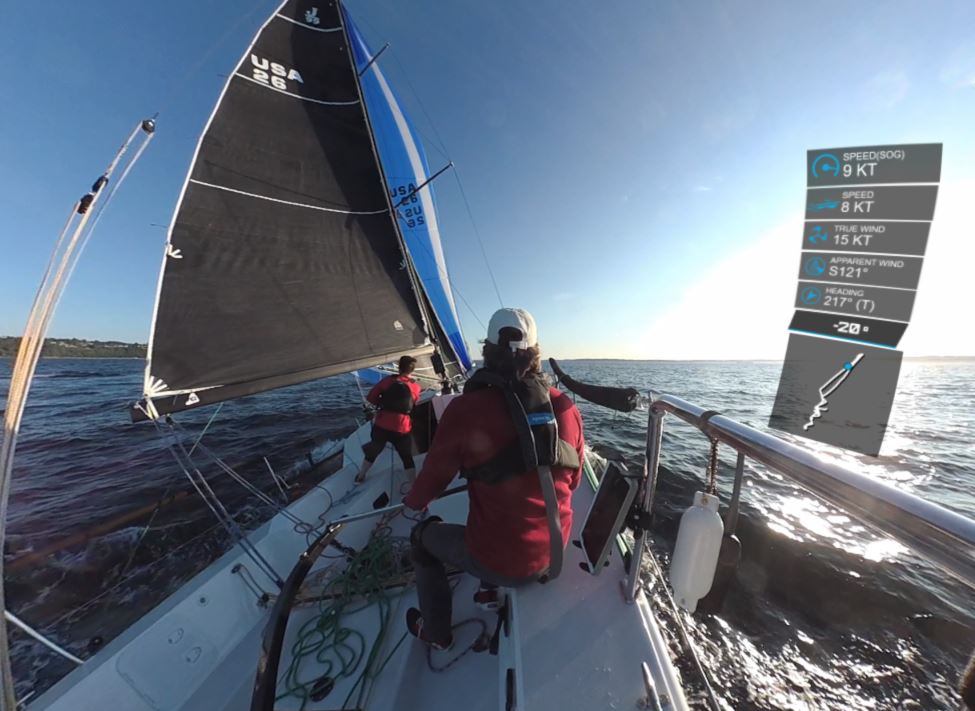 Since I didn’t start writing this until Thursday, I’m sure I will forget some details. It was a great few days of racing, though, with both successes and lessons learned.

Saturday saw the modified running of STYC’s venerable “Down the Sound” (DTS) doublehanded race. Normally, the race runs from Seattle to Gig Harbor on day one, then party, then the return trip on day two. Since Gig Harbor is not accepting reservations at any of their marinas, and because of pandemic concerns, things had to be modified.

STYC’s Race Committee came up with a great 16nm course with Blakely Rock and Duwamish Head as the required marks, then tossed in the bonus feature of a “fiasco” event with competitors deciding which way around the three-legged course was the best. The start is also a pursuit start, with boats with higher PHRF ratings starting first. This is a fun format because anyone you pass, you beat in the final standings.

With winds forecast to be light to non-existent, most everyone prepared for a long day on the water. And while they were light for sure, there was enough wind for most all boats who started to get home before the deadline.

I raced this one, in the normal format, last year on Dragonfly single-handed. DTS is part of a three-race Triple Sound Series (TSS) of single/doublehanded only regattas STYC puts on. I’ve developed something of a tradition of truly crappy starts in these events. I’ve done 5 of TSS races now, and here’s the damage on the first four:

With this track record, and the light breezes, I was really hoping to break the streak. Plus, with Taylor aboard I was hoping she would unjinx me.

We were somewhere between 30 seconds and a minute late to the line as the wind pretty much died for us on the run back. We shook it off, though, and started in on our strategy.

Unlike most everyone else, we ducked back inside instead of trying to do a straight run to the west side of the Sound. Our goal was to get as much current push as possible from the Ship Canal. This worked really well. With better than a knot of push showing on the instruments, we passed our first boats even before clearing West Point.

In light breezes, One Life is not a great pointer (yet). To keep up boat speed we needed to press the jib a lot, which caused some trouble as we were trying to pass a J/35 and trying to avoid being passed by a J/109. A few clearing tracks later and we were in a better position to make for the tack around Blakely Rock.

All was uneventful until we got to Blakely Rock and the boats around us started to converge for the rounding. We were playing it safe given it is easy to go aground there, and ended up getting rolled by a SunFast 3600 who started later than us. We were able to fall off, though, while the SunFast kept high.

The angle was good enough we could have launched the Code Zero, and Taylor and I talked a lot about it both before the race (we even put it up to practice ahead of our start) and after rounding Blakely Rock. We eventually decided the shift from the Code Zero to the spinnaker at the Duwamish mark would be slow enough we’d lose any time we gained. This was largely based on a navigation error by yours truly, who has the Duwamish mark in the wrong place on the GPS. This strategic mistake was a pretty big error as it turned out.

We were sailing VMG to the mark (which wasn’t actually the mark, but at least it was on the same line to the real mark), perplexed why so many boats were sailing close hauled and working south — well off the most direct close reach line to the mark. Chutes started popping among those boats on the southern line, however, and we figured it out — They were sailing south to get to the correct angle to carry a chute the rest of the way around the mark and home.

We kept on our VMG course, which was a good decision given the wind shifting around to the west gave us our angle to carry the chute without going too far off line to the mark. As soon as the true wind was steadily in the 100s, we popped the kite.

As we closed in to the correct mark, the rounding was a bit of a mess. Lots of boats in the middle of gybes, some actually working their way back south to the mark. We took a wide approach to give us plenty of room to gybe, thought we found a hole inside J/109 Lodos, and dove for the mark.

Lodos started closing the hole — largely because it was their proper course — but was kind enough to not slam it shut. I thought we had rights, but Taylor pointed out I was wrong when we started talking about it back at the dock. So, team Lodos, we owe you one for not protesting us.

That started a pretty hot reach as we tried to make sure we got above the big container ship waiting for dock space at the Port of Seattle. Some boats were going inside, notably J/111 Raku, and Taylor wanted to try it, but I have really terrible memories of sailing into a hole behind a big container ship there. So, we stayed outside.

Throughout all this, the wind continued backing around to the west. We found ourselves in the kind of reach the Code Zero would have easily managed. As it turned out, we could have flown the Code Zero from right after we rounded Blakely Rock all the way to almost West Point. Frustrating to make that sail choice call wrong.

Overall, we finished 19th of the 50 boats who started the race and third in our class of seven boats. It was a great day on the water, even if we thought we could have done better.

We were back to crewed racing two days later in the regular Monday night STYC series. This fifth race was a fun one because, when we got back to the dock, we couldn’t think of anything major we did wrong.

All the tacks were great. All the gybes were great, including the gybe set we made on the second rounding of the windward mark. The tactics all worked as planned and Taylor made all the right choices on which side to go when.

When you have a day like that, you hope you do well. Fortunately, we did. We crossed the line ahead of everyone in our class and were 3rd fastest around the course of all the boats in the fleet.

On corrected time, Poke and Destroy continued their impressive string of bullets. We just didn’t quite stretch our lead enough, and they got us by 22 seconds on corrected time. Overall, we corrected out 11th.

With two good races in the prior four days, Taylor and I were optimistic about our Wednesday doublehanded effort. The breeze was supposed to be in the mid teens and relatively steady, and as we headed out to the race course we were in high spirits. It was the last race of the Summer Series, though I did not realize that until after the race.

The CYCS committee boat set an unusual course for the fleet — A windward leg to Spring Beach, then a reach to a mark set 1.3 miles windward of the start, downhill through the finish line to the Ballard Cup mark, then back windward to finish. I LOVE these reaching courses, and wish we’d see more of them on Wednesdays.

The start and the windward beat went OK, despite the fact the Spring Beach mark (I swear) seems to move around. It’s never where you think or, seemingly, where it was the last time we go there.

We round the mark and eyeball the reach angle, eventually deciding we’re game to fly the kite. In an indication of the remainder of the downwind leg, get ready for the reach and the kite goes up — not our smoothest hoist, but given the angle and the 15k winds, not bad. We ran for the reaching mark with everything flying — the spinnaker, J1, and the main. The boat was very fast on this leg, and we only had to slack off the spin sheet a few times to keep her from rounding up in the gusty conditions.

We get past the reaching mark and start a more sedate VMG course. Then it comes time to gybe, and the kite really snarls — essentially wrapped around everything it could wrap around forward of the shrouds.

Next gybe, big hourglass. Next gybe… Well, you can see the pattern.

After the race, the consensus seemed to be I was being too cautious on the turns and not bringing the nose around fast enough after the clew was through. I was being careful, perhaps more than usual, as the wind was stronger than we’d raced in before and very shifty.

We got down to the Ballard mark, which is always in — to be blunt — shitty wind conditions. There is some Vortex of Hell down there making roundings always an adventure. We actually managed the rounding in good shape — despite getting (metaphorically) tangled up with a boat that missed the fact there was a reaching mark and shouldn’t have been on the course any longer. We yanked out the protest flag, not that it helped much given they cut off our wind.

We got the kite down in good shape (whew), and decided to tack out into what we though was going to be better air. We made it about 10 boat lengths and the wind went to zero.

(Did I mention I hate the Ballard mark?)

After a knuckle-biting four minutes, the wind came back through our little hole and we managed to get going. Huge wind shifts and big gusts (8 –> 15 –> 6 –>12, with no real pattern) made the upwind leg back to the line challenging.

We finally made it back, though we were mentally exhausted from a pretty rough day on the water with all the gybe mistakes. We still finished first in class, though, continuing the string of class bullets we’ve had in each race but the one we missed. Only one or two other boats in our class have shown up each night, though. We ended up second on overall corrected time for the day, behind J/105 Corvo 105 — who simply made far fewer mistakes than we did even though I thought we had better lines on the course.

That sort of result is, in some ways, even more frustrating. To come out second overall with so many time-consuming mistakes… Just makes me wonder what it would have looked like if I’d managed the gybes better from the helm.

This was the last race in the series. Officially speaking, One Life won her first racing series as we shot bullets with a 1 – (DNC) – 1 – 1 – 1. A huge thanks to Taylor for sailing with me in this doublehanded series and to CYC for organizing the race during the pandemic.