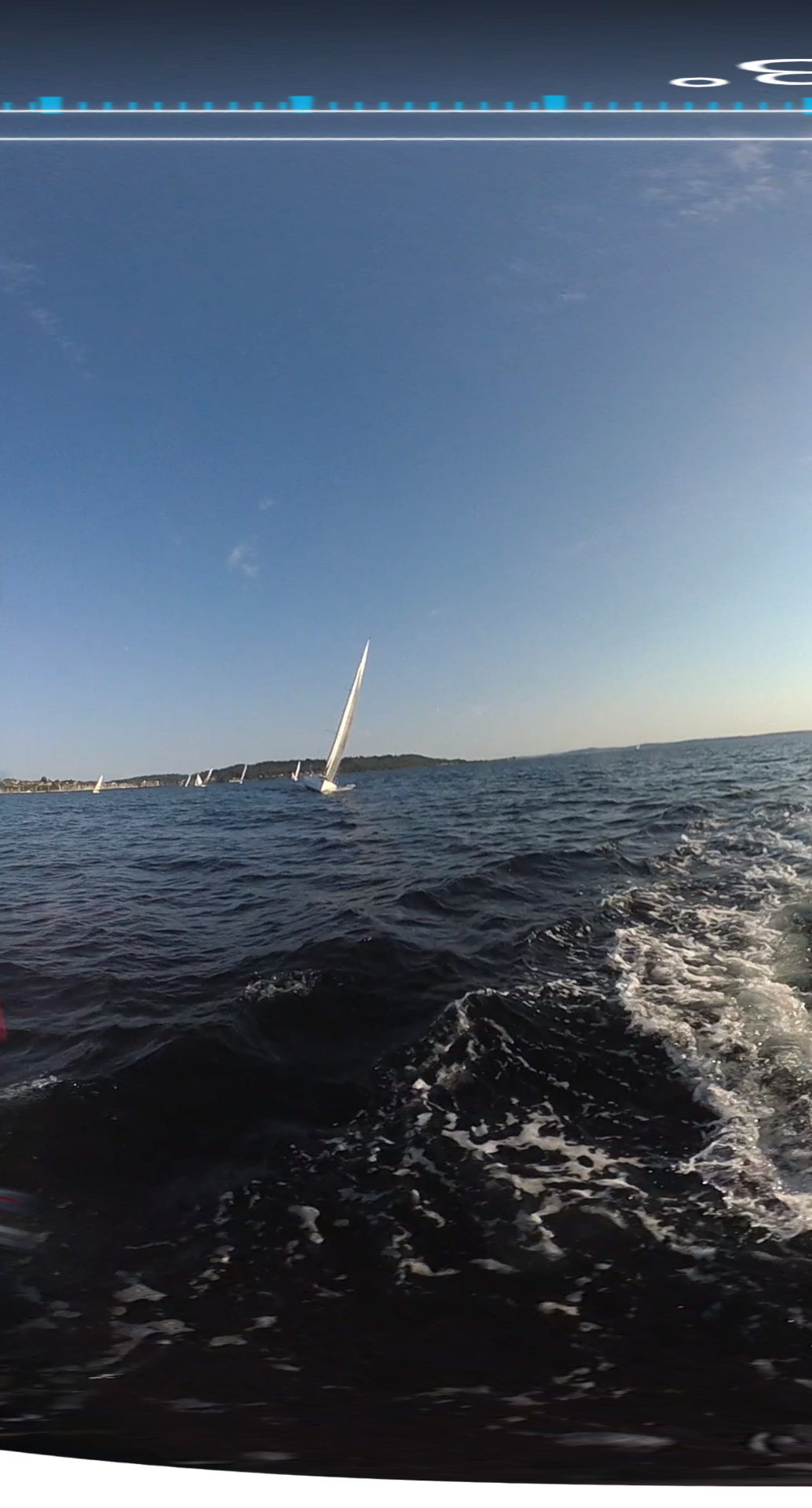 There are probably more racing articles written about the start than any other aspect of a race. I get it, because in a large one-design fleet with a typical windward/leeward regatta course, not getting hosed on the start is the difference between winning and losing at upper competitive levels. For most of us, however, that’s not where races are won.

For example, screwing with another boat at the start just because you can slows both boats — not just your competitor. It always amazes me, when watching some class starts, the starting horn will sound and nobody is within 2-3 boat lenghts of the line because they are all so busy screwing with each other below the line. This all comes from people overly focused on the start.

But that’s not my theme for today. My theme is recounting how small things add up. That’s where races are won and lost.

I wrote earlier in the week about snarling our kite at the windward mark in WATH race 1. That was caused, in part, by whipping the boat through the gybe too quickly in too little wind.

It’s a small thing as a helmsperson, really, that pause at a key moment of either a tack or a gybe. The more you helm, the more subconscious it becomes. This sounds like a good thing, but it isn’t. If you allow it to become automatic, and not purposeful, I guarantee something will happen to interrupt your process.

It’s usually traffic. Sometimes it is simply fatigue. Often it is you as a helmsperson still thinking about something that happened earlier in the race. Any of a number of things can go wrong if the helm is not being precise and purposeful every time the tiller crosses the centerline of the boat.

Pausing through tacks, even with a non-overlapping headsail, is a lost art on some boats. With good crew coordination and proper technique, the new active sheet shouldn’t need to be winched in more than is necessary to change gears coming out of a tack. If I forget and whip the boat through the tack, however, the crewmember unfortunate enough to be handling the new active sheet has a LOT of grinding to do. They can’t get back to the high side in time, the boat doesn’t accelerate properly, and you have to count it as a blown tack.

All because the I didn’t pause a heartbeat or two when bringing the nose through the wind.

The problem caused by not pausing when gybing an asymmetriclal spinnaker is more obvious. Much mayhem ensues. This was the case in Monday’s Ballard Cup race when I blew our first set by blowing a gybe.

Taylor called for a gybe set when we rounded the first windward mark. The hoist went well, the kite filled enough to do the gybe, and then I whipped the boat through the turn without pausing at the necessary key moment of the gybe. The kite was a mess and nearly every boat we’d passed to get to the windward mark passed us back.

It’s hard to recover from that sort of stupid mistake, both as a helmsperson and a crew. But recover you must, because none of us are going to retire at the first mark due to a blown gybe. (All the rest of our gybes went really well.)

Nevertheless, Monday was not our best effort on One Life. After some additional work on the rigging during the day Monday, we probably ended up tuning too tight for the conditions. We weren’t communicating well or working well together on the boat. We were 3-4 lengths beyond the leeward mark before we got the kite down, for example, simply due to a communication issue.

We ended up a disappointing fifth out of seven boats in class, a whopping 8 1/2 minutes back (11 corrected) from the leader and 22nd out of 34 boats overall. Despite this, we’re now 3rd in class and 6th overall — though that will change some once the worst race is tossed.

One silver lining was a great conversation back at the dock. We’re going to try a few new things with crew organization and communication next Monday and see how that goes.

Getting One Life up to speed was never going to be a straight-line path. Adjustments to boat and crew teamwork were always going to be up-and-down endeavors involving the myriad of little things necessary to get a new boat and new crew up to speed.

In the end, however, Monday was still One Life’s Three Laws successful. Nobody got hurt, we didn’t break the boat, and we had fun racing on a beautiful night on Puget Sound.

Wednesday’s CYC Sound Doublehanded race was due to have higher winds. Taylor and I made the call to not adjust down the rig tension to see if we were too tight period or just too tight for the conditions. We popped out to the racecourse and did a few tacks to get back into practice and test some different inhaul/downhaul settings.

The race committee got the J/80s off first and everyone else (us and class mate J/27 “63“, plus the J/105s) off together in the second start in a SMWS course. It wasn’t our best start of the year, mostly because skirting a J1 doublehanded is not exactly easy (i.e. impossible). We had to luff up to clear the J1 over the lifelines to get to pointing angle and that did us no favors.

We went inside pretty quickly, and through a fortunate righty managed to lay the Meadowpoint mark from quite a ways out. We prepped to do a standard hoist, which went pretty well. We weren’t first in our start around the mark, but we were in OK shape.

The first gybe also went OK, but the second ended up in a monster of an hourglass that felt like it took forever to clear. Fortunately, the boats closest to us didn’t gain all that much as we were able to keep some speed on while trying to un-f**k the chute.

Watching on video, guess what happened? Yup, I gybed too quickly.

FWIW, such things doubly suck when you’re doublehanded. I can see Taylor up there struggling with the kite and I can’t really do much to help other than to keep the boat on a heading (in the shifty winds) that doesn’t make it worse. Pretty much the longest three minutes ever.

She managed it, though, and we were off to the races again. I spelled her on the gybes for a bit to give her a breather.

We caught back some of what we lost and ended up in perhaps the best position (strategically) at the leeward mark of any race yet this season. As long as we didn’t blow the dowse, we’d be OK.

Out went the jib, deep went the heading, off went the sheet, tack, and halyard. Taylor is madly stuffing the kite in the hatch and I’m madly trying to reel in the main as I drive the boat up — without hitting the buoy, thank you very much or driving well beyond like we ended up doing on Monday night.

Each time I brought the boat up into the wind a little to get around the mark, I’m eyeballing how much sheet is still above deck. But Taylor, somehow, is stuffing the kite down the hatch at least as fast as I’m able to bring the mainsheet in. By the time she’s done, I’ve got the boat mostly trimmed for upwind and we’re off.

Instead of banging into the breakwater, we decide to tack back out into what we think is better wind. And since the start line is set farther out — not using the STYC pin — we think the inside line won’t be as helpful.

The wind picks up a little more, and the boat is sailing much better than even the initial run. We keep her heeled closer to 20 than 15 degrees, and she seems pretty happy there. We’re pointing well on either tack, which was nice to see.

Periodically, Taylor gives me an update on how we’re doing relative to other boats, but I’m fixated on the telltales and the instruments to make sure I’m sailing her fast. It comes time to tack and we throw a great tack and we’re headed towards the line in good shape.

A couple more tacks, we shoot the line, and get the horn.

I look around and don’t see any boats in front of us. I’m a little confused.

I look behind, and…

After coming close last week, but letting Rush through ahead with a bad-luck gybe into a monser wind shift, we finished ahead of the entire fleet! Honestly, I was shocked.

I spent much of the last couple of off seasons reading different racing books. Whether it was in one of those or one of the many magazine articles I read, I ran across a piece of advice. It said, “The last person on the boat who should have any idea whether they are winning or losing is the driver. If the driver always knows where they are in a race, they aren’t paying enough attention to driving.”

I took the advice to heart early on, which is one reason I don’t try to drive and trim main unless I’m singlehanding or when I have to while doublehanding. While I know lots of racers I respect who say it’s actually best to do both, on a keelboat of any size I have a hard time believing it — and, more importantly, I certainly can’t do both well.

So, it was a great surprise to me to see everyone in back of us for One Life’s first line honors.

J/105 Corvo came across a little over 15 seconds after, which was close enough to correct over us by about a minute. We ended up second overall behind them on corrected time. That’s what I love about sailing, though. There is always something new to accomplish next time.

The boat performed better overall Wednesday versus Monday, despite having the same rig tension. That’s happy news, because it means we have the beginnings of a tuning guide for the boat. Where we were last week for light air, where we were Wednesday for medium.

The next test for One Life is SYTC’s pandemic-modified Down the Sound race. We don’t get to go to Gig Harbor, but we will get to do a pursuit start and — wind willing — get some racing in around Blakely Rock and the Duwamish Head day mark. It’s a fiasco race, so we can round all the marks to port or starboard — our choice. If you’re hanging around the downtown Seattle waterfront in the early afternoon, wind willing, keep an eye out for us!