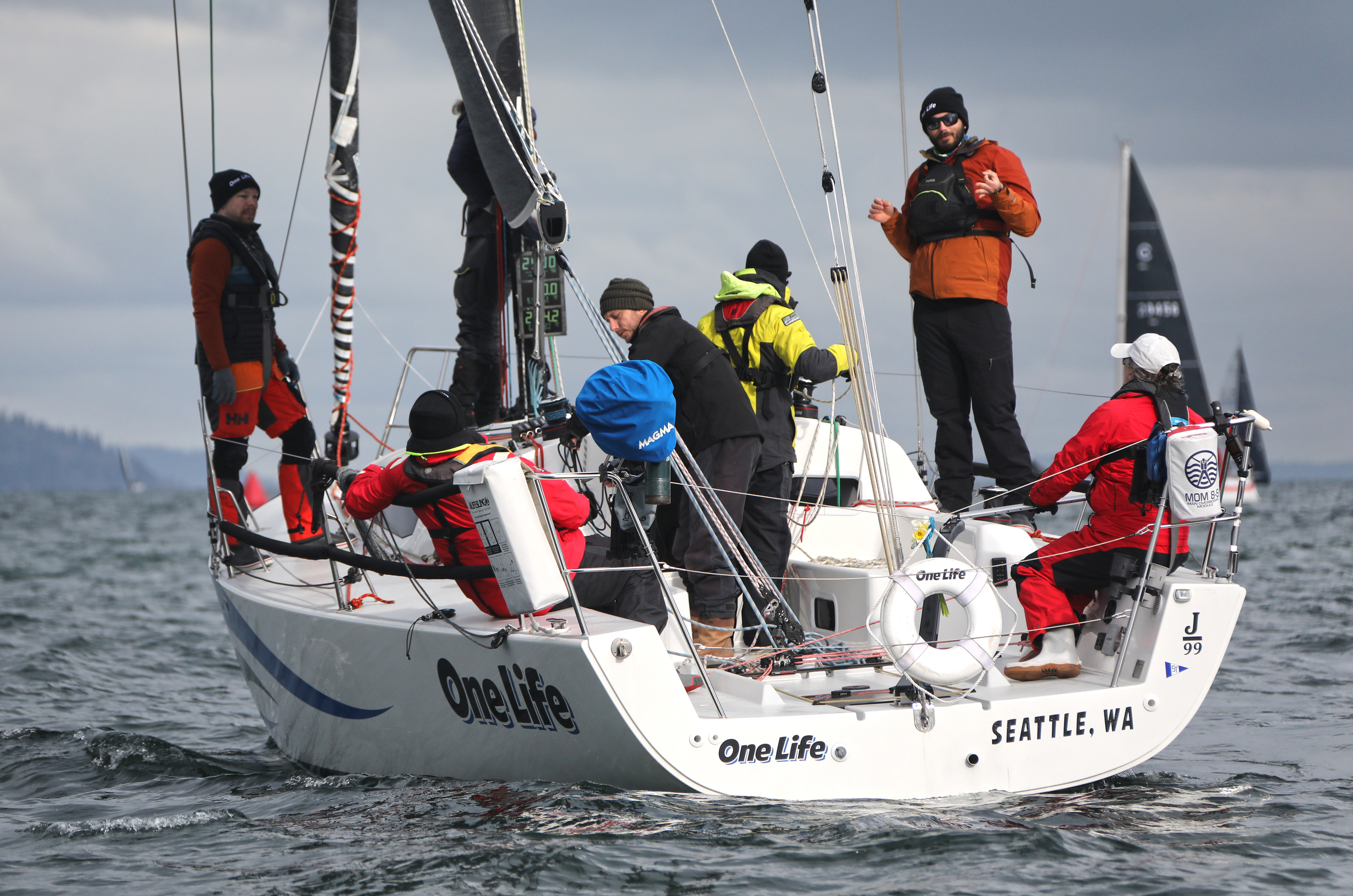 The offseason for One Life is mostly self-imposed because here in the Great Pacific Northwest we are able to race 12 months out of the year and there are well-run, well-attended races throughout. I made the decision to designate our offseason to span between the November Round The County race and Sloop Tavern Yacht Club’s (STYC) Freshwater Race in late February.

This allowed progress on a fairly substantial list of offseason projects. The boat came out and into the wonderful hands of my friends at CSR Marine for some keel repair work and servicing the engine and sail drive. Rigging work included the addition of a 2:1 on the main halyard, upgrading two blocks on the backstay after learning of a failure causing a rig collapse on a J/99 in Europe, new spin sheets, and a Code Zero tweaker line. Most of the interior work revolved around the head — adding a check valve between the black water tank and the through-hull to reduce smell in the boat (where we race, we are not allowed to discharge black water overboard).

Personal offseason work included taking US Sailing’s International Offshore Safety at Sea course in February, organized by The Sailing Foundation. This was my first time through the course and it was eye-opening in many ways. The multiple hours of online coursework taught me some really key lessons and the in-water component of the in-person course taught me more. The shopping spree of safety gear as a result of the course hurt the pocketbook a little, but no regrets whatsoever in that regard.

CSR was busy this offseason, so One Life’s stay on land finished less than 24 hours ahead of our first race. All good, though, as it allowed us to push back our dock call by an hour since CSR allowed us to stay docked there and avoid the morning passage through the locks.

This race is the only time of the year where One Life races in freshwater. It’s a race on Lake Washington, which is one set of locks, 7 bridges (5 of which have to raise), two canals, and two lakes east of our normal stomping grounds at Shilshole Bay Marina in Puget Sound.

The passage includes 5 bridge raisings for One Life, including one at the Fremont Bridge — the most active bridge in America for such things. Once we’re through into Lake Washington, the start line is on the east side of the lake near Kirkland.

The race itself was a study in light, fluky winds with dumbfounding wind shear. We spent an hour under spinnaker with the spinnaker on the same side of the boat the Windex was pointing.

(Go ahead and think about that for a second. Yes, I used “pointing” correctly in that sentence. No, that’s OK. I’ll wait while you process…)

We had a pretty good strategy to deal with the W/NW/SW winds (stay out of wind shadows from the land on the west side of the course), but ran into the mother of all wind holes just as we were about to pass the fleet. One round of wind-seeking beverages and wind-seeking hot dogs later, we got released from the wind hole and managed to get around the course fast enough to take 3rd in class and collect our reward of yummy bacon.

The rain started just after we dropped some of our crew at the Kirkland Marina dock and persisted throughout much of the 2-hour trek home through the 5 bridge raises and the locks. Despite the soggy ending, it was a great shakedown for the racing season and I look forward to doing it again next year.

The night before what, for much of our fleet, is the inaugural race of the season, the forecast was for strong southerlies in the 15-17 range with gusts to the mid-20s. We had a rockstar crew aboard One Life for the race, and I was really looking forward to sending it.

Race day dawned with much different weather. In the space of about an hour at the dock, we went from deciding on the J3 and the A4, to deciding the J2 was the more strategic choice to go with the A2, to leaving the J1 up and running the light air sheets on the J2.

I thought we made really good strategic decisions during the race. We stayed in good air and found good lanes for beneficial current. The boat was much more powered up than we saw last season for the generally 8-10k winds we were seeing, and we were fast over the water.

We rounded the first mark in a crowd of the faster boats on the course, including most of the J/105 fleet who started 5 minutes ahead of us. Perfect set and a great downwind run to the rocks. We cheated out to the middle where we knew there was wind and stayed in the current bands we identified on the upwind leg.

We got to the rocks in good shape, found ourselves a hole in the layline parade to gybe into, then ran into a LOT of traffic around the rock. Spent some time trying to defend our line without running aground while making sure boats on the rock side of us also had room to sail. We split from the fleet immediately, seeking clean air.

The trip back to the finish line went pretty well. I lost the plot driving a couple of times in some odd wind shifts, but overall I thought we sailed a really smart race strategically and had plenty of power in the rig in a wind range that has given us fits over the last two seasons. We got back to the marina for our debrief, and were really happy.

When the results came out, I have to say I was surprised. I figured we’d sailed fast enough for a podium finish in class, but we were mid-pack in our class at 5th and roughly mid-pack overall.

After some conversations over the subsequent week, we think we probably sailed a longer course fast. If any of our fellow racers that day happen to read this, in fact, and did a tracker or have nav data showing your total distance sailed for the race, I would really appreciate it if you could drop me a note in the comments (or via FB @OneLifeJ99) and let me know your distance sailed for the race. I can then try and compare your sailed distance with ours and see if our guess is right.

Whatever the standings, it was a wonderful day with a great crew. We made some great advances on getting the rig powered up in those conditions — to the point that I believe only small tweaks are needed to give us some added point so we’re still fast, but sailing a shorter course.

This sort of thing is what I love about sailing: Figuring out the little nuances that make a difference between being fast and slow, but not too fast.

2 thoughts on “Racing Season Has Arrived!”