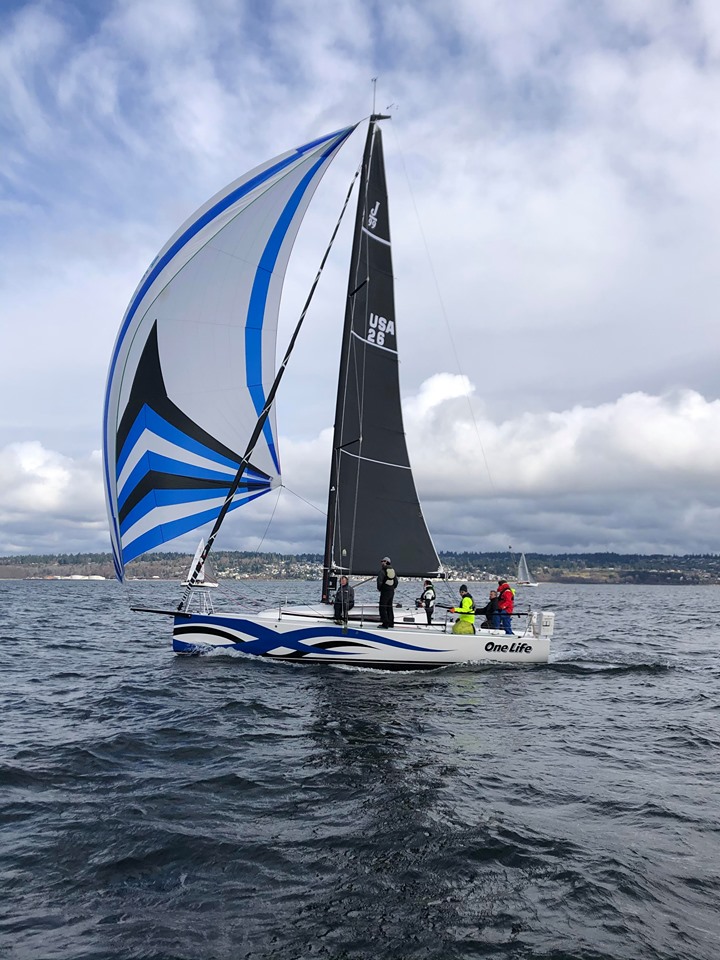 The day finally arrived, dawning cold, windy, and cloudy. It was time for One Life’s first race. SARS-CoV-s/COVID-19 worries abounded, with 3 crew members canceling out of an abundance of caution (thanks to all three for thinking of the crew and not just themselves) and the pre- and post-race functions canceled.

The race was Seattle Corinthian Yacht Club’s Blakely Rock Race, the first of three races comrpising their annual Center Sound Series. 21 nm, leaving from in front of Shilshole Marina, going southwest around Blakely Rock, heading up north nearly to Edmonds, and then back down to finish near the marina.

Scary-ass pandemic aside, 5 intrepid crew members showed up 2.5 hours before our start to get the boat ready to go. Josh from Doyle Sails Northwest, Ben from Sail Northwest and his wife Jen plus Eric and Kelly joined me to put the new kid on the block through her paces.

I can honestly say I wasn’t nervous, which surprised me some. I wasn’t 100% on my game, though, as I forgot to start the nav tracker, the Race Q, and the VIRB 360. I’m going to have to get a pre-race checklist mounted on the boat…

The forecasts were all over the place, with most calling for light winds clocking from south to west to north during the day. It was blowing 8-10 at the dock with forecast for more of the same or lighter, so we dropped the J3 and mounted the J1 along with putting up the race main. Given the long initial run, we left both the A1.5 and the A2 in the bags to decide upon later.

About an hour before our start, we shoved off the dock and motored out into a blustery 13-15k breeze. Launched the main and Josh took one look and realized the upper battens needed to be adjusted. Back down it came for a little TLC. We put it back up, brought the jib out for some adjustments, and headed back to the right side of the start line.

I normally would have been fretting we never launched the kite, but there was a high level of experience on the boat. Josh has been sailing for forever, Kelly has lots of experience in the pit, Eric races his own boat, and Ben & Jen are the (among other accolades) 2018 Moore 24 National Champions on their More Uff Da. I wasn’t worried about the hoist.

Honestly, I don’t think I’ve ever been less nervous before a start. Ben was calling tactics. He told me where to drive and I did. It wasn’t a perfect start, but we hit the half of the line we were aiming for and in clear wind, so it was a win for sure.

There were 8 other boats in our class, ranging from PHRF 75 to 96 (One Life rates at 78). We crossed the line between one of the two Beneteaus (I think. Like a good driver, I was just driving!) to windward and Dos, a very fast Sierra 26 and a bit of a legendary boat in these parts, to leeward.

Dos, with the crew hiking pretty well, came up on us a couple times, but we were able to keep our point and leg her out enough so she tacked behind us. We tacked close to the jetty where we wanted and off we went to the southwest.

The uphill run to the island was pretty uneventful for us. When the driver got himself in the groove on starboard, we were fast. On port, we had some speed issues until we made some adjustments towards the end of the run.

Wind gusts hit 18 just before the start, so we were a little worried about flying the J1. Setting aside the fact the sail isn’t built for upper teens, One Life certainly had no issues holding that much sail. She was steady as a rock and grippy as a gecko. Remarkable, really, given the rig and sailplan we had up.

To digress a moment, when you’re really concentrating on driving you don’t know what’s going on outside the boat. It’s simply not your job when you have a tactician and, as a driver, thinking only hurts the ball club. Yes, when you’re close or crossing you get your head out of the boat. And every driver is guilty of rubbernecking a little.

I was particularly trying to concentrate because I was rusty and, honestly, One Life doesn’t drive like any other boat I’ve driven. She’s an order of magnitude less twitchy in that kind of wind than a J/80. And she’s much more communicative and flat than a J/105 (though, to be fair to the 105, I’ve only ever driven 105s with wheels). The first half of the windward beat I wasn’t really driving all that well.

And my first couple of tacks? Let’s just say they were so fast, even the experienced hands were squawking. I’ve never had a boat come through the center of a tack as fast as this one.

That said, more than a few times I thought we were slow and I glanced at the instruments (something else I need to get used to is having all those data) and saw were were going over 7 knots. Effortlessly going over 7 knots. We’d get a gust, I’d ride it up and Eric would lay off the traveler a touch to rebalance the helm. Even when we were surprised by a gust, One Life just shrugged and accelerated enough to shift my weight to the other butt cheek.

I should note we decided not to try the water ballast during the race since we didn’t have a chance to practice with it. She’s just that flat and stable.

We rounded the island with an abundance of caution, doing our gybe with the main and jib instead of quick-setting the kite and gybing afterwards. After the flawless hoist, I ducked down below. I was badly under-clothed for the conditions and had numb hands and teeth chattering going on for about 20 minutes prior to the rounding.

A quick trip below to change into warmer gear, and I was back up top to catch the tail end of a rain squall and a really nice run downwind to the north mark.

By the sailing instructions, the north mark was supposed to be a mile east of our main shipping channel. Blakely Rock is on the west side. We generally headed back across while most of the fleet decided to hang on the west side.

We ran into some light air once we got across, but gybed quickly away and caught better breeze towards the middle of the course. Then started the hunt for the mark.

We kept expecting the fleet leaders to fast-reach across the Sound to where the mark was supposed to be, as they were all still hanging on the west side. Then we saw the first boats round the mark…

… way the hell over on the west side of the Sound.

We’d just gybed and, due to great clairvoyance by tactician Ben, were headed right at the mark at a pretty good angle. We get closer and realize that instead of the mark being about a mile east of the traffic lanes, it had drifted to about three boat lengths north of the center lane navigation buoy.

As we rounded the mark, the race committee officially abandoned the race. There was a big container ship blasting up on the fleet at 20 knots and there was no way to safely get the tail end of the fleet around the mark before all hell broke loose with the commercial traffic and the USCG.

I’m told we rounded the mark in third place in our class, which was much better than I expected for our first race. I think we’d probably have got one place back going upwind, but it would have been a battle. And I have no idea how we would have corrected out over the other boats.

I handed the tiller over to Ben, Josh, and Jen for some tuning work and grabbed beverages from the fridge for the crew to celebrate our first race. We played around with some of her toys a little in the sunshine on the way back to the dock, thoroughly enjoying the end of a great day of sailing.

We were disappointed we didn’t get a result so we could measure ourselves against the rest of the fleet, but perhaps this was better in the end.

Surprisingly, our area regatta photographer was not out to capture the fun — but some friends managed to snap pictures of One Life in her first race.

The second race in the Center Sound Series is in two weeks. We have a list of things to adjust on the boat before then, like with every new boat ever, and I’m really looking forward to dialing her in.

To all who made a point to shout encouragement or compliments to us on our first outing, thank you. We have an amazing sailing community here in Seattle.