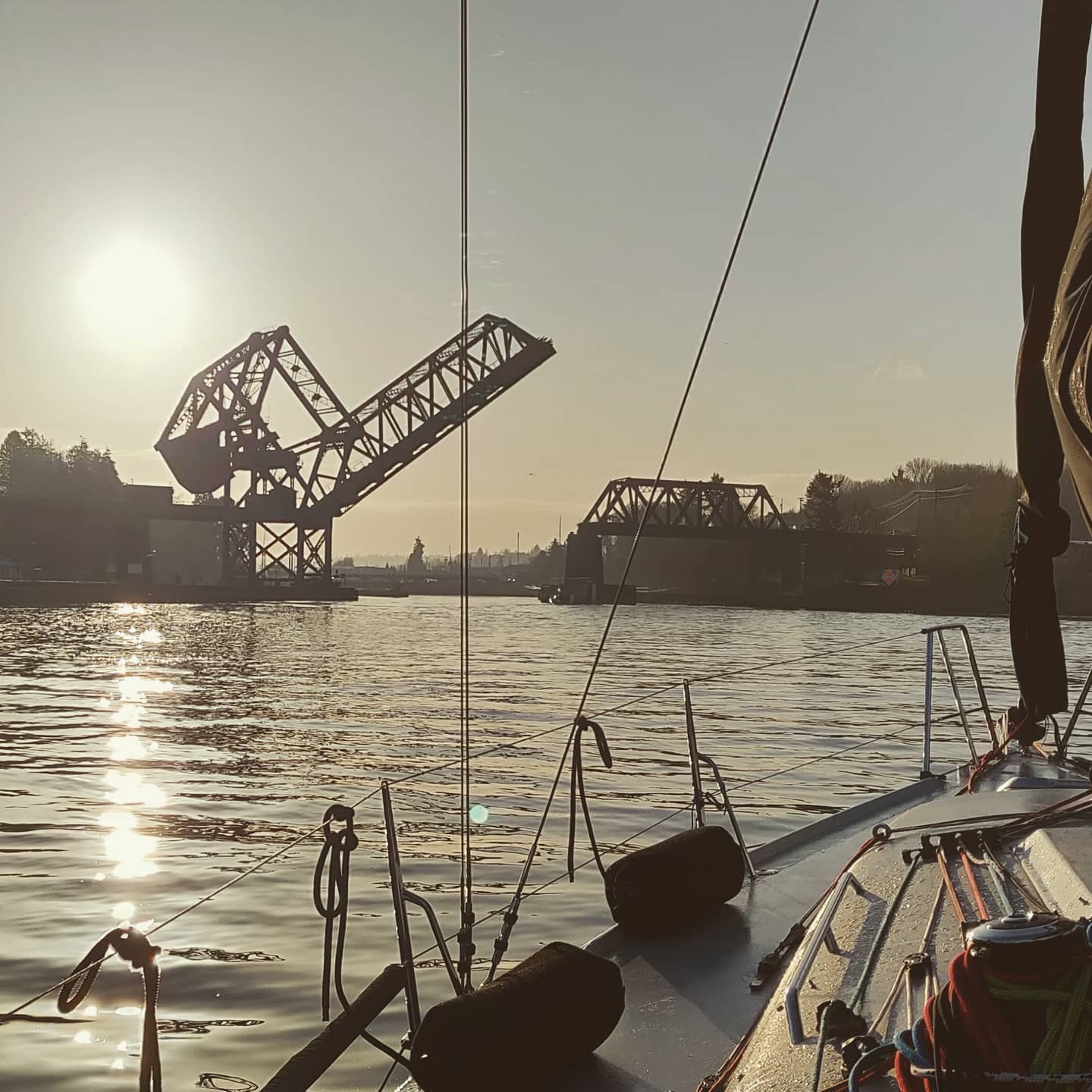 After a series of work-related and weather-related (a foot of snow!) cancellations, the One Life crew was excited to finally be able to get back to racing. The weather forecast didn’t appear to be willing to cooperate (2 gusting to 5 with a south to north transition mid-race), but everyone on the skipper’s meeting Friday seemed optimistic — so what the heck!

The dock call was bright and early, 7:30am, to make sure we could get through 5 bridges and the locks, pick up crew in Kirkland, and make the race on time. The day dawned bright and beautiful.

It also dawned cold, with the big surprise of ice on the deck of One Life when we arrived for the dock call. Some knucklehead (me) forgot to leave the heater running below, which didn’t help. A little bit of sliding later, and we were off the dock by 7:45am.

We were joined in our parade through to the lake by a number of other boats, including La Lucha Moore, GBH, and Madame Pele. No real drama, aside from the cold weather making the air horn for the bridge pathetically squeaky. Even the BN bridge (above) was open and behaving — which is a rare occurrence for me (jinx alert, jinx alert!).

After a short delay, the race went off as planned. The race committee stuck to the long course — even after certain members of our crew (cough, Lizzy and Kelly, cough) offered to bribe them with bacon to run the short course. This was 100% the right call. For while the winds were light, they were sailable throughout the course.

If was pretty apparent everyone wanted to start at the pin, including us. We jockeyed around and hit the line at the pin in great position and at speed — and the race committee comes across the radio and says,”That was Class 5’s five-minute horn.”

Turns out the race committee popped the AP right after Class 4 to give a pair of very tardy J/105s time to pick up crew from the docks and get to the start line. We didn’t see it, as we were busy dodging boats in what we thought was the real start. There was no extra horn or radio call announcing it. We didn’t figure this out in time to get our race clock reset at the 4 minute warning, which means we were pretty screwed in terms of being able to time the starting line.

In stepped the crew of Madame Pele, who in a gracious display of goodwill towards a fellow competitor, counted us in to the 3 minute mark so we could get our start timer right. A complete class act from them and much appreciated.

A couple of turns and some jockeying later, we managed to get the pin start again right on time. Credit to my crew for holding it together and getting us back to where we needed to go in the chaos.

The initial run was an odd one as the inshore line we thought was the loser ended up being the winner. Props to Wendy Hinman, calling tactics in her first race on One Life, for sticking with what was clearly working and keeping a good eye on other boats across the course. We had an efficient rounding in a good position, popped the kite, and we were off to the north end of the lake.

The run north was an interesting one, as narrow strips of north/south wind dominated the race course. This made for some interesting strategy — do you go deep to stay in a band or do you stay hot and fast to try and string some bands together? With winds in the 4-7 range, we chose the latter. It worked pretty well for most of the way north, but towards the end we started to lose touch with our class front runners — particularly Madame Pele who was just on fire this day.

Nevertheless, we felt pretty good about where we rounded the top mark, hoping we could reel Pele back in on the upwind since the wind was starting to pick up. No such luck as the light winds proved to provide a boat 1,300 lbs lighter with the advantage. Don’t get me wrong… Tom Andrewes and his Pele crew just sent it on this day, making all the right moves back to the south.

The Davidson fleet did well on this day, with Conor Harkin’s Davidson 30 GBH taking 2nd in our class and fourth overall racing doublehanded.

The story of the day was Alex Simanis’ La Lucha Moore, which blasted off the line and never looked back. Also racing doublehanded, Alex and Nick Bannon were so far ahead of the fleet at the top mark I didn’t think anyone would come close. They gained line honors almost 4 minutes ahead of Madame Pele and also corrected out first overall. A great race from one of the best sailors in our area.

We came home fourth in our class, almost seven minutes behind Madame Pele, which was good enough for 4th in class and 9th overall (both corrected) in the fleet of 34 boats. We crossed the line 5th overall.

There was absolutely no disappointment in our finish. Despite only a few months racing her, we know One Life isn’t the best light wind boat given her rating and the inability to run an overlapping headsail like nearly all the other boats we typically race with. That said, this was probably our most consistently good light wind race — which made me really happy to start off the 2021 season after not being in a race since October of 2020.

The motor back through to Shilshole was uneventful until the end. A highlight was being locked up with the Madame Pele crew and being able to pass them a foil packet of bacon hot off the One Life BBQ as a thank you for doing us a solid at the start line and congrats for one hell of a race from Tom and his crew.

Things almost went catastrophic shortly therafter, when the BN bridge nearly closed on top of us.

With no horns as warning, only the faint bridge ringer bell as we were less than 3 boat lengths from the bridge, itstarted closing it on top of One Life. I’d hit the throttle at the ringing, though we were initially blocked by a civilian Beneteau puttering slowly along.

Fortunately, I had the air horn nearby. I let out a long blast as I frantically tried to figure out whether I had room to spin back towards Pele close behind us or whether turning to starboard would just run me into a lower portion of the closing bridge. Just then, the tender shack window popped open and the tender stuck his head out and waved us forward.

Thank goodness for whatever safety engineer required positive pressure on the closing mechanism so the bridge stopped while the tender got up and poked his head out to see what was going on. I give it 50/50 we would have made it without the bridge dropping atop our mast.

With that bit of drama behind us, it was an easy final motor to home. It was a great race, well run by the all-volunteer STYC race committee, with the sort of spirit of friendly competition I’ve come to love whilst sailing with the crews here in the Pacific Northwest.

The day ended with perfection at a socially-distanced, small group, masked beach bonfire at Golden Gardens organized by Kelly and Lizzy. Kris and Kelvin the Reluctant Boat Dog came down to join us.

Next up is CYC’s Blakely Rock race, marking the one-year anniversary of One Life’s first appearance on the starting line (though her actual first completed race wouldn’t come until July). Crossed fingers the CYC crew gets the marks to stick this year so we can get the race finished. We’re also looking forward to being able to race with 6 crew under the new pandemic rules in place for the 2021 season.