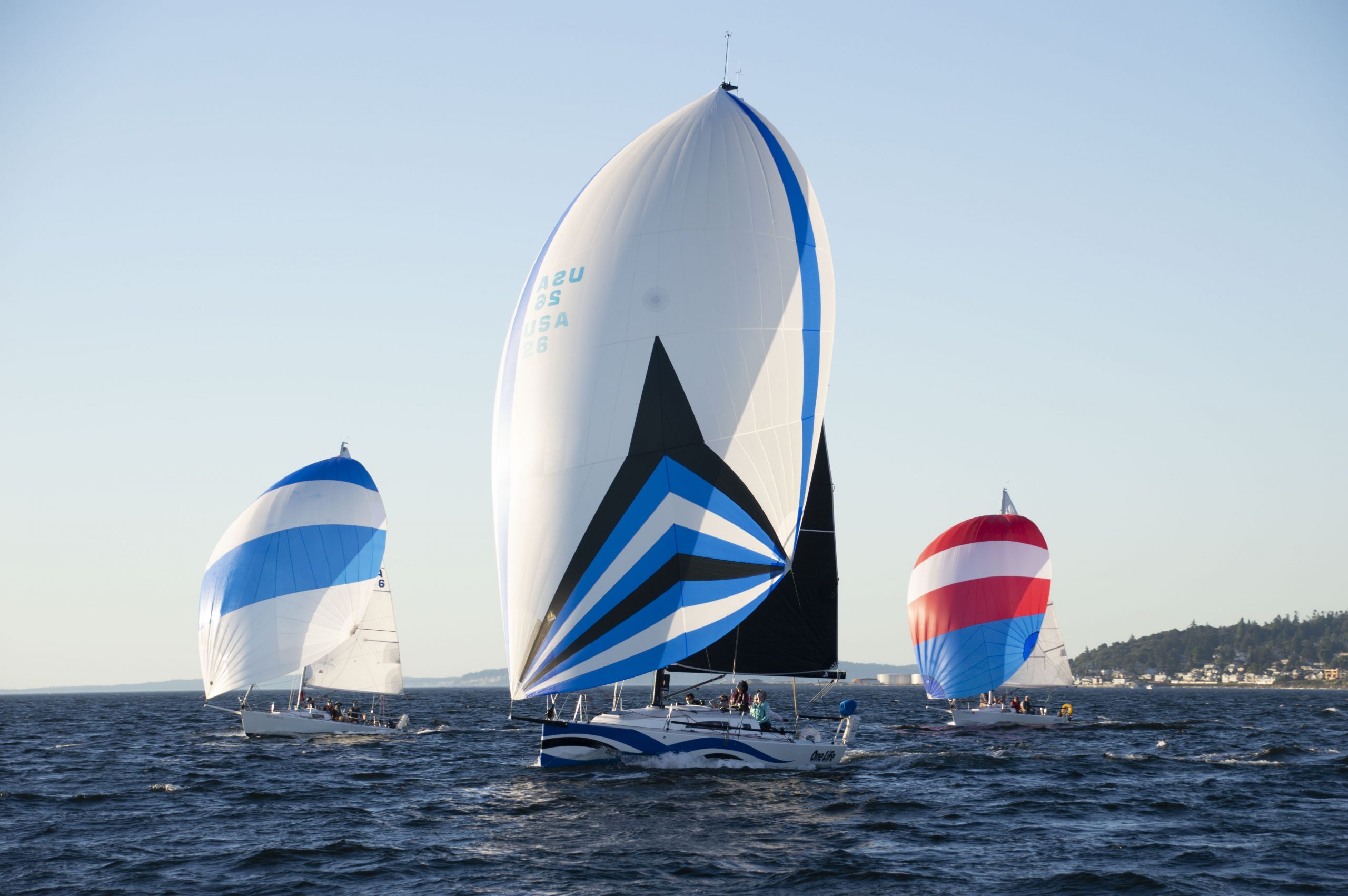 It’s been a busy week for work and home, so it has been a while since I’ve been able to sit down and pen a blog post. I’m waiting for a long backup to complete, however, so now’s a good time to recap the recent races.

In a word, “slow”. Still not sure what the issue was, though a recently filled potable water tank adding a couple hundred pounds is the leading culprit. No serious mistakes, just slow.

How about we just forget about this one?

I hit the windward mark dead on and then we drug it around for a long time. Just as the race committee send a skiff out to help, we managed to get free. Fortunately, they were able to drag it back before it became an issue for everyone else.

The wind exceeded forecast, so we decided before the start (but after we were on the water) to swap out to the J3 and A2 from the J1 and A1.5. Easy to do with the spinnaker, not so easy with the jibs. My amazing crew did it quickly and made it look easy.

This was a fun race, with lots of wind variability up and down the course. The committee set us to go to Spring Beach and back, and we were having a pretty decent day. We rounded the Spring Beach mark in good shape, and then were ripping 9+ knots downwind back to the finish.

We were having trouble getting the kite to do well when soaking, until we remembered the A2 likes a bunch more tack line than we normally use. An 18″ ease on the tack got us much better VMG, but by then the damage was done. We were fast, but raced a longer course.

On the final gybe to the mark, I slipped and fell on my face — under the tiller, somehow. (Yes, I’m OK.) The gybe went way too hot and really hurt our final angle to the line. While we had no chance on corrected time to catch Poke and Destroy and the 105s, the mistake blew our chance of crossing the line ahead of them.

We dropped from 3rd to 5th in the standings, but all of us in the hunt for the third spot on the podiu, are separated by 1-1.5 points so it should be anyone’s series in next week’s final race.

This has been a doublehanded series, but CYC put the word out over the weekend they were going to allow crews based upon boat length. For us, we were allowed 4 total on the boat. A day-of cancellation of one of our regular crew brought Jake Newton (R2AK 2019 racer on Team Educated Guess) board (he was available and close, luckily) to be our 4th.

Taylor took pit and jib trim, Mathieu was our foredeck, Jake did main and spin trim, and I drove. The race committee started the J/80s first, and put us in with the J/105s for the second start.

I’ve mentioned here before our struggles trying to point. We cleaned up the port/starboard differential with some rig changes, but we were still slow — especially in lower winds — when we tried to point high.

We know the J1 and the J3 need to be recut to accomodate an ability to move the sails farther inboard. In an effort to be able to bring our J1 inboard more, a few weeks back I added a couple of Dyneema loops to the tack line to get the foot of the sail incrementally higher. It didn’t help all that much, but it was closer.

In the best male of tradition of “if a little helps, then more will be better”, before the race I slapped on another $11 worth of Dyneema loop to the tack. It didn’t allow us to go inboard much further, but it did allow us to get a bit more closure on the top of the J1 in the brief bit of practice we were able to do ahead of the start.

Taylor, who has been golden at getting us in good positions for the start blew her first competitive start of the 2020 season. We approached on port at the pin in good shape, but had to do a couple of maneuvers to avoid going over early and didn’t have our speed up enough to cross the fleet. As a result, we had to toss a tack right at the pin (thankfully there was room), so the J/105 were rolling over us from the beginning.

Fortunately, everyone wanted to head inside to the beach so they tacked away from us before they could really do much damage. We went another boat length or two, and tacked ourselves.

By the time we had One Life back up to speed after the 3rd tack inside 100 yards of the start line, we started to notice we were not only sailing higher than the J/105s, but faster.

This was new and exciting!

I should make clear none of the 105s had four crew – I think one had three and the other was doublehanded. So, we had the advantage of having four for all our maneuvers. Nevertheless, this higher/faster thing was new.

We recovered very quickly from the bad start and by the windward mark were leading and never gave it up the rest of the way home. We finished amongst the J/80s, who sailed a shorter course and started 5 minutes earlier.

The second race featured a pretty good start, but the J/105s were hanging much closer. We were still around the windward mark first, but they were both right behind us. Peer Gynt was confused about the course and went for the wrong mark. More Jubilee stayed close the entire run to the leeward mark. A couple of tacks after the rounding, however, they caught an unfortunate header outside and we caught a nice lift inside. That was the ballgame.

Oh, and thanks for the applause line from the committee boat when we missed them by about 18″ on our run to windward in the second race. We were pretty sure from a ways out we’d get the neccessary shift to do it, and everyone was standing by to gybe quickly, but we were able to make it without the gybe.

It was a nice end for One Life’s first CYC Sound Wednesday series. My close college buddies and I are taking her up to the San Juans next week, then we’re doing PITCH up in Bellingham, and then Kris and I will sail her home through the San Juans. As a result, we’ll miss the remainder of the Wednesday series season.

As always, thanks to the race committee, to our competitors, and to our starting line mates in the J/105 fleet for some great racing.