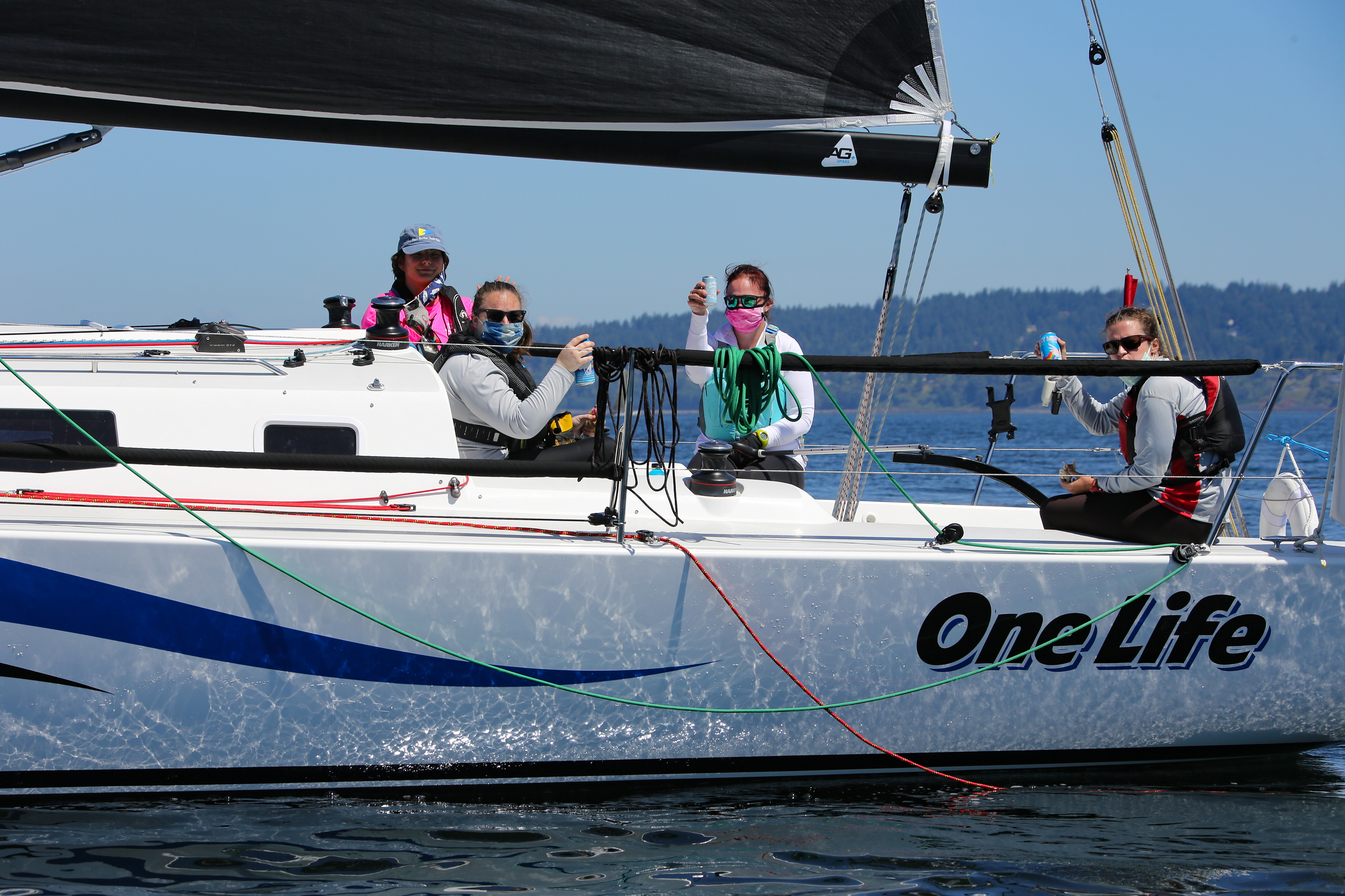 Every racer in the NW gets a second Christmas when 48 North’s SARC (Seattle Area Racing Calendar) comes out. It means the racing season is soon to arrive and we get to discover new races.

One of the highlights on SARC this year was a new event, thought up by Jennifer Harkness and Eric Finn and sponsored by the Sloop Tavern Yacht Club, called “Women at the Helm”. I highlighted this on the calendar as a focus race for the One Life program.

When STYC announced a couple weeks back the regatta was on, it was like Christmas all over again. With Taylor at the helm, Kelly doing main, Cecily handing foresail trim, April doing foredeck, and me safely behind the mast in pit — we were set.

When the class breaks came out and had us in with the fast boats, I knew it would be a challenge. We’d been racing (mostly) with boats with higher PHRF ratings, which is easier psychologically because if you’re sailing well you’re passing people. In our class for WATH, we could sail perfectly and still be passed by most of the boats in our class.

The volunteer committee crew (yay, Image!) got three races off, as planned, in light to very light winds. That also wasn’t great for us, as many of the fast boats in our class were half our weight. Nevertheless, we were in the hunt for most of the races.

The pointing problems of prior weeks remained a thing of the past and Taylor, driving AND tactician-ing this time, had us in good positions at the start throughout the regatta. We were especially happy to see The JanPix Team out on the water. She’s always done such a good job with pictures of my other rides (memorably, Dragonfly and Reckless), I was excited to see what’s she’d have for One Life’s first regatta.

The first course was a two lap affair — NMBMBN for 6.4nm. We made good time down to the first windward mark and Taylor called for a gybe set. We’ve done this before, but this one was not our best effort. The kite hung up in the shrouds on the set somehow then just snarled around the forestay on the gybe. April was tugging away up there, and I ran up to help, but it was a mess. Even slacking the halyard didn’t clear it. Taylor had to gybe back around to get the snarl to finally clear.

JanPix got all kinds of beautiful shots of the snarl.

With the winds as light as they were, the mistake was pretty much it for us for race one. I should note we did a starboard takedown at the leeward mark and successfully did a gybe set at the windward mark. By working hard the remainder of the race, we did gain quite a bit of ground back, but still ended up seventh out of eight boats.

The crew requested a reset before the next race, so we popped open the fridge and distributed adult beverages along with our lunches. Jan swung by and the resulting picture was a much happier affair.

Part of the lunchtime conversation was to remind everyone we were in a class with boats rated faster than us — not something we’d experienced thus far in this pandemic-shortened season. We (myself included) needed to not get anxious about being passed, but to concentrate on sailing the best lines as cleanly as possible. I think the conversation helped, as we had a great second race.

Race two was shorter, NMEN for 2.1nm. The breeze was closer to 10 than 5 this race, which was helpful. Taylor did a hell of a job, after shaking off some shouting from an adjacent boat at the start. The crew did a great job as well, with solid hoists, douses, and gybes. We crossed the line just ahead of Poke and Destroy — a first for us and a matter for some celebration — but corrected out one second behind them. Nevertheless, we ended up fourth of eight boats for race two.

Race three was the longest of the bunch, NRN at 7.1nm. The wind was filling in with the velocity centered around the 9-10 range. When the fleet goes “around the corner” out to the tiny Spring Beach buoy (mark ‘R’), strange things happen. This time, the fleet sailed most of the way to Kingston before trying to lay the line. We were concentrating on VMG mode and watching with interest the 3-4 boats who cut inside early. They were getting massive lifts along the shore inside. We decided to split the difference, staying where we knew we had wind but heading to the mark on a much earlier line than most.

This would have been a winning move in 15-20 knots given most of the fleet overstood by a long ways and would not have had as much of a speed differential on their reach back. At 10 knots breeze, they could all handle the broad reach and despite the fact we sailed a smaller overall distance, they caught us at the mark.

The wind shifted multiple times and on the run back to the line we simply couldn’t hang with the symmetric boats. We could match angle or speed, but not both. Taylor did a good job splitting the difference in the hopes we’d get a favorable enough wind shift closer to the mark to make up the difference.

And, we almost did.

We gybed back inside after the shallows at Meadowpoint and caught not only more breeze, but a favorable wind shift. Sadly, it petered out close to the line. We narrowed the margins, but not enough to do better than sixth of eight boats.

I want to shout out to the folks on Different Drummer. Despite having the heaviest boat in the fleet, they sailed the hell out of her Saturday in light breezes for fourth in class and fourth overall.

Our at-the-dock-talk post race was upbeat, mostly. We’re all pretty competitive and would have liked to do better. But 6th overall is pretty damn good, once you take a breath and reflect on the fact we’re a brand new boat with a brand new crew.

We identified the fact we have work to do in very low winds to get the boat up to speed and keep her fast. That said, good performance in very low wind speed is often what comes last for a new crew and a new boat. As with all things in the One Life program, patience will be required.

Women in the sailing world, either at the top levels or in the beer can fleets can have it rough. Despite the fact the sailing community is collectively a wonderful group of human beings, there are some men amongst us who haven’t embraced the fact a woman sailor is just another sailor. Period. They are on the boats with us to race, just like us. They aren’t there to be the target of sexual advances. The stories I’ve heard from some of the women I’ve sailed with… well, dudes, let me say this. If they were your daughters you’d be preparing for fisticuffs.

Awareness of this issue has improved dramatically over the last couple of years, but it still has a long way to go. In the Puget Sound fleets, we have an amazing group of sailors who happen to be women. Skipper Jenn. Team Sails Like a Girl. Clipper Racer Lizzy Grim. Safety Wizard Margaret Pommert. Rad Racer Carol Buchan. Offshore and Cruising Guru Carol Hasse. And so many more. They, and the hundreds of un-named women sailors they inspire, make many of us male boat owners eager to do better by all our crewmembers.

WATH was an easy way to celebrate the expertise of women in our area by the simple fact they got to drive the boat. Since most race boats are still owned by men, this sort of event remains necessary. I was completely jazzed by the number of guys who gave up the tiller for their fellow sailors. And, to answer the unspoken question: I had absolutely no hesitation in handing over the regatta to Taylor — despite the fact One Life is a brand new boat.

Here’s a few more pictures from the regatta, but before I go I want to say thanks to all the folks reading the blog. Readership has picked up and I appreciate your notes and your comments when you see me in person. Take care out there, everyone, and we’ll see you soon on the water.