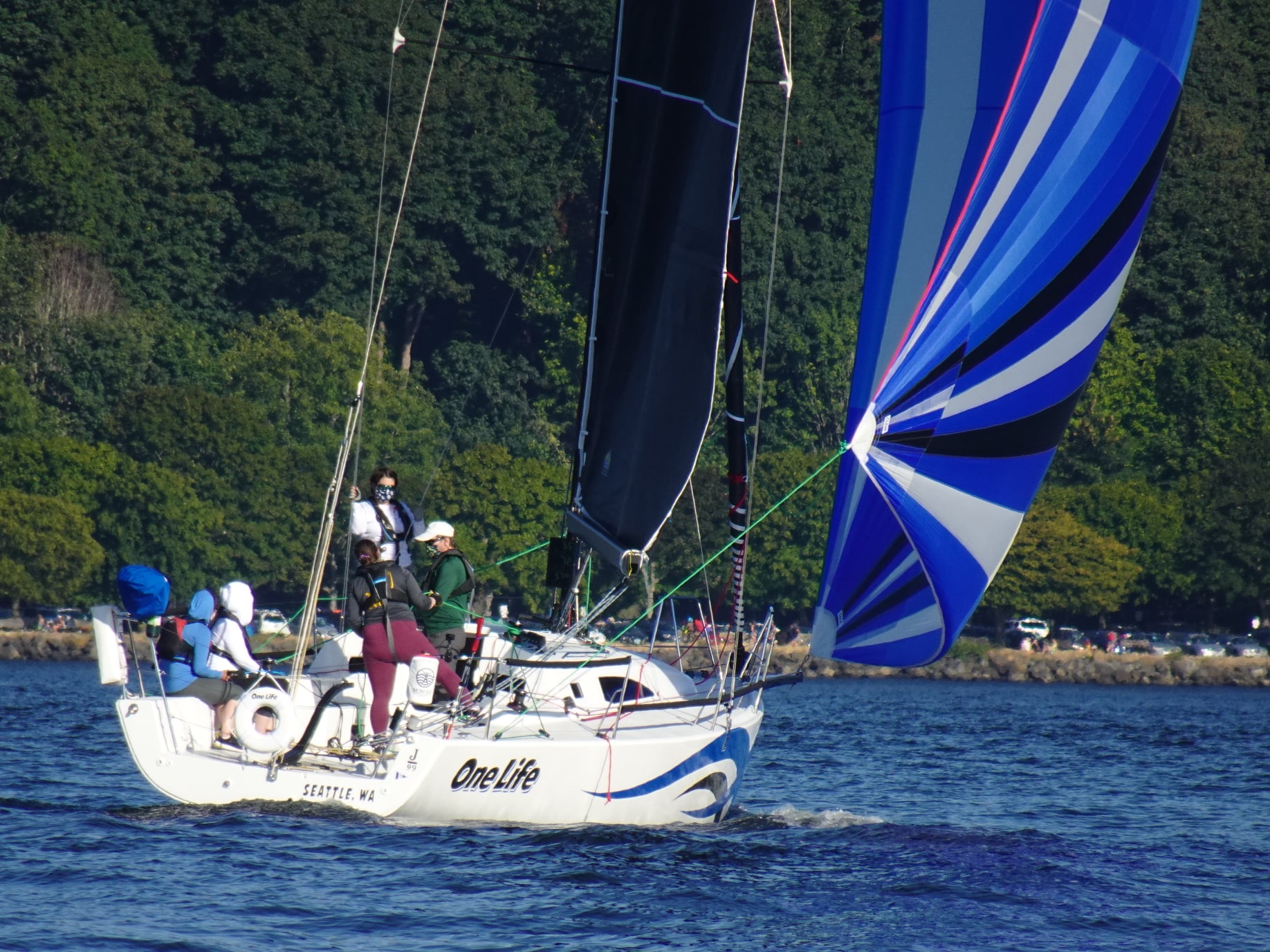 In the last entry, I recounted some of the growing pains One Life has been experiencing since sailing has emerged as an allowed activity under pandemic conditions. Despite my frustration, I was optimistic our team of vendors would help us solve the issue.

A fellow J/99 owner recommended a rigger, and he came out and performed some preliminary magic. Based on advice from other J/99 racers, we moved the mast step all the way forward. That, plus a rig rebalancing, seems to have gone a LONG way to fixing our biggest problem — not being able to point as high on starboard as we could on port.

For our first test of the new settings, Taylor Joosten helmed One Life at STYC’s Ballard Cup series Monday night in preparation for STYC’s Women at the Helm (WATH) regatta this weekend. I handled pit.

The 105s mostly all clustered at the pin and got to the line about a boat length or so ahead of us — with one called over early. Class leader Poke and Destroy (an Evelyn 32-2) was on our windward hip and peeled away a few boat lengths off the line. They wouldn’t have had a need to do that last week, so it was our first indication the rigging fixes helped.

When we hit the layline to the windward mark, the 105s had fallen back and weren’t able to close the gap even though we were on starboard tack — to be fair, though, they were in a gaggle and busily trying to get in/stay out of each other’s air.

Our gybe launch was marred by an hourglass, but it cleared relatively quickly and we were off downhill. This was a great strategic call by Taylor and the crew did a good job getting the kite re-rigged to the opposite side to enable the strategy. We were able to pick our way through the oncoming boats without too much drama.

Poke is a monster downwind, particularly in windward/leeward racing with her symmetric kite. While we couldn’t keep up with her on the run downwind, we managed to stay ahead of the other 9 boats in the class and were second around the leeward mark. With more good driving by Taylor and some great reading of wind on the course, we crossed the line second in our class.

Final results cebame available Wednesday night, and it was happy time for the One Life crew. We took second in our class behind Poke and Destroy and fourth overall behind Poke, Gaucho (Ross 930), and Rush (J/80).

(Why Wednesday for results from a Monday race? One change made in response to COVID was to reduce the number of people needed for the commitee boat. This means all skippers must self-report their times. Doing this in a timely fashion is a work in progress for skippers in our area…)

We know we have additional work to do on the rig, but this was an excellent first run at fixing our issues. Once we get the rig “finalized”, we’ll need to recut the J1 and possibly the J3. We also have additional work to better center the mast at the deck level and get some added space on the intermediates so we have more options on rig tune.

But progress was very welcome after a few weeks of frustration.

Mathieu Demarne, who normally does foredeck for us Monday nights but graciously stepped out for the day so we could run with the same crew we’ll have for this Saturday’s STYC Women at the Helm regatta, took some great pictures of us.

Next up for One Life was the CYC Seattle Wednesday Sound series doublehanded racing. Taylor and I race this series, and it’s been a great learning experience for me, both about the boat and sailing in general.

If you’ve been around me much, you know I have a deep love for a 1980s TV show called Sports Night. Penned by Aaron Sorkin before West Wing, this was a 30-minute TV comedy/dramedy with talented actors, revolutionary photography, and amazing scripts. Set in an ESPN-like TV sports show, the executive producer of the fictional “Sports Night on CSC” show was Issac Jaffe (played by the brilliant Robert Guillaume). Issac was the boss we all wish we had, or aspire to be. One of my favorite Issac quotes, of many great Issac quotes, comes in the first season.

This, specifically the first part, sums up how I’ve looked at putting together crew for One Life.

Back to the race…

We actually didn’t think we were going to get a race off, but the CYC committee boat set the start line and got the fleet out in 4-6 knots with a SML (start, Meadow Point, Ballard mark, finish) course. As the wind never really started to fill in, they shortened course to finish us at the Ballard mark.

We were in good shape at the line in a start combining all the PHRF boats with the J/80s. I was relieved to see our newly-found starboard pointing ability worked even with me at the helm. The upwind was relatively drama free, except we sailed ourselves into a bit of a wind hole, losing some places to the rest of the fleet.

We rounded the windward mark a few boats back and made the call to stay outside, which was a bit non-intuitive since the fleet did well banging the inside on the way north. It was also the reverse of Monday’s strategy.

It paid off well, and we managed to string together a series of puffs on the west side of the course, pulling ahead of the entire fleet. We were within 2-3 boat lengths of the finish line and it became apparent we had to gybe to make the pin. The wind was disappearing, so the focus was a slow, smooth gybe…

We gybed and the kite refused to fill. So there we sat, two boat lengths from finishing and broadside to the entire rest of the fleet bearing down on us. And we can’t get the sails to fill.

(That exchange is funnier in retrospect than it was at the time.)

Meanwhile, Rush is gybing around us (somehow) as we sit there with a several dozen square meters of expensive sailcloth hanging from the mast and doing their best impression of an indoor curtain. Then we see J/105 Corvo dropping their kite and putting up their jib.

Taylor tells me to gybe the boat again, which was no easy matter since she really was mostly dead in the water. But, as Miracle Max told us, there is a big difference between mostly dead and all dead. One Life made the spin, somehow, and we crossed the line with the kite strapped in — just ahead of Corvo and good for second across the line.

Back at the dock in our traditional post-race discussion, we decided to look fondly at the 15/16th of the race we did very well and not take it too hard that the moment we gybed for the line the wind shifted nearly 180 degrees atop the boat.

Sometimes, you just get unlucky.

That said, we also made mental notes we hope should help us exit any similar situation faster the next time. We ended up 1st in class and 6th overall one a challenging, low-wind night.

Overall, we made great progress this week and I’m really looking forward to Saturday’s regatta — One Life’s first.