Finally, all the sails 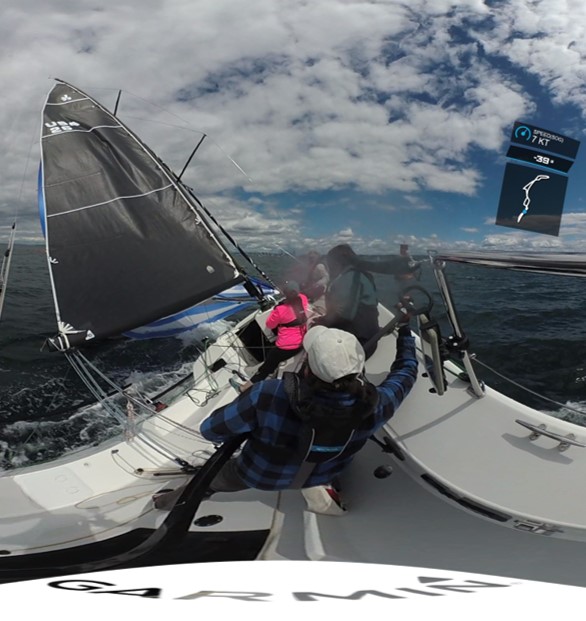 It was just about two years ago I first laid eyes on J/Boats’ design brief for the J/99. If you would have told me then it would take almost three months after the boat was in the water to finally see all her sails I would have thought you an idiot.

And yet, here we were on a sunny Sunday afternoon heading out with a plan to do just that — the first launch of both the A1.5 and the Code 0. With only four of us, none of whom had ever flown a Code 0 before, it was destined to be an interesting day.

Figuring the one who bought the Code 0 was probably the best one to figure out how to launch it (just in case something bad happened) I crossed the line into the Foredeck Union portion of the boat. I figured to try my hand at the pointy end for the first time in several months.

Up it went, back down it came because I thought I had the halyard on the wrong side. Then up again when I realized it was on the correct side. A couple of shakes later to get the top furling swivel to clear the jib top, and she was launched.

Then I had to spend 3+ minutes back at the pointiest bit of the pointy end. Why? Well, untying knots with a boathook is now on my sailing resume since I didn’t properly secure the Code 0’s furling loop. It ended up knotted around the drum. Fun times. Fortunately, it was on a fairly flat day.


As you can see in the first part of the video below, it was a fun ride with this sail. We have lots to learn about it, particularly doing a better job keeping the boat flat, but I’m hopeful we’ll get many opportunities to try it out in the longer races this summer where the winds are light.

If you’ve been following along here since the beginning, you’ll know One Life’s hull design was inspired by the design for the A1.5 created by Kris. The Doyle Sails “Colour Your Sails” tool is a great time-waster in the winter months — or when waiting for a new boat. After dozens of tries between the two of us, Kris came up with the design on the left, which was the inspiration for the hull art on the right:

I’d been struggling with hull designs for months. I started with a design inspired by the nose art on the P-40 Warhawks flown by the First American Volunteer Group commanded by Captain Claire L. Chennault. I read pretty much every book I could find about the Flying Tigers when I was a kid. Then I played around with using ’99’ on the bow like battleship numbers, perhaps anthropomorphizing them with eyes and teeth. None of it worked.

When I saw Kris’ design, it clicked. The 3-pointed black part in the lower center of the kite looked like I imagined the bowsprit would look as viewed from water level. Then stripes of blue, white, and black under it. As I’ve mentioned before, the good folks at Prism Graphics simply nailed it from there.

It finally took until this outing to get the Doyle Sails A1.5 out of the bag. I just wish we were racing and JanPix was around to get one of her great bow-on action shots to see the spinnaker and the hull art together.

We sailed down to Blakely Rock on the day, intending to round it and launch the kite. There were a bunch of fishing boats in the area, however, so we continued down to Blake Island figuring we’d get an easy launch in the lee north of the island.

It was a great day for doing this, with the breeze closer to 10 knots than 15 — especially since we only had four crew, one of whom had only ever been on a boat with a spinnaker twice before. Kelly and April were pros to get the kite launched without a hitch and Kris settled into the trimming position looking like she was born to do it.

One thing led to another, however, and it was clear we either had to douse the kite to make the Decatur Reef off Restoration Point, or sail the boat really hot. After eyeing the upwind GPS track and seeing there was a decent probability of favorable shift, I chose to heat it up.

I’ll digress for a moment (big shock, I know) and remind readers the J/99 has an option for twin rudders. In fact, this was one of the main reasons I liked the boat’s design brief. My reasoning here was due to the fact Dragonfly (our prior boat, a Columbia 26 Mk II) was quite happy to round up in even moderate breezes if you weren’t paying close attention. I figured having two rudders would help. After a bunch of advice from smart boat people, I decided to go with the single rudder.

(You can probably see where this is heading, right?)

Y’all are probably going to get tired of me writing about how stable the J/99 is. Sorry, can’t help it. She is. We were flying the A1.5 forward of a beam reach with only four people and One Life really didn’t flinch for most of the run.

It became apparent we were going to clear Decatur Reef with the buoy just to starboard. I heaved a sigh of relief — on the video you can even see me look down for a second — and then we caught a gust. You can hear the gust come on the camera mic, even. The gust plus one tiny moment of inattention and we rounded up headed right AT the Decatur Reef buoy.

Kris & Kelly, to their credit, didn’t hesitate an instant. Kelly hollered and Kris blew the sheet and not 3 seconds later all was well.

We passed the buoy without leaving any paint and had a pretty relaxed remainder of a day in the sunshine.

Lots of credit goes to the crew on this day. Not only are Kelly and April great sailors, but they are patient teachers and remarkably calm under pressure. I have no idea when racing will start again, but I cannot wait to start racing with these folks! Kris has gamely jumped in with both feet and has proven to be a fast learner, despite not having much experience on boats like One Life.

The only dark spot on the day was when I got home to discover the Garmin chartplotter telemetry did not make it to the camera. The only data we had for most of the sail is the camera’s internal GPS, its internal heel indicator, and its internal course plot. I’m hopeful I can get to the bottom of this problem because not only do these data make the videos more interesting, it also makes the video much more useful for training purposes.

Thanks, as always for reading. Hope you enjoy the video!