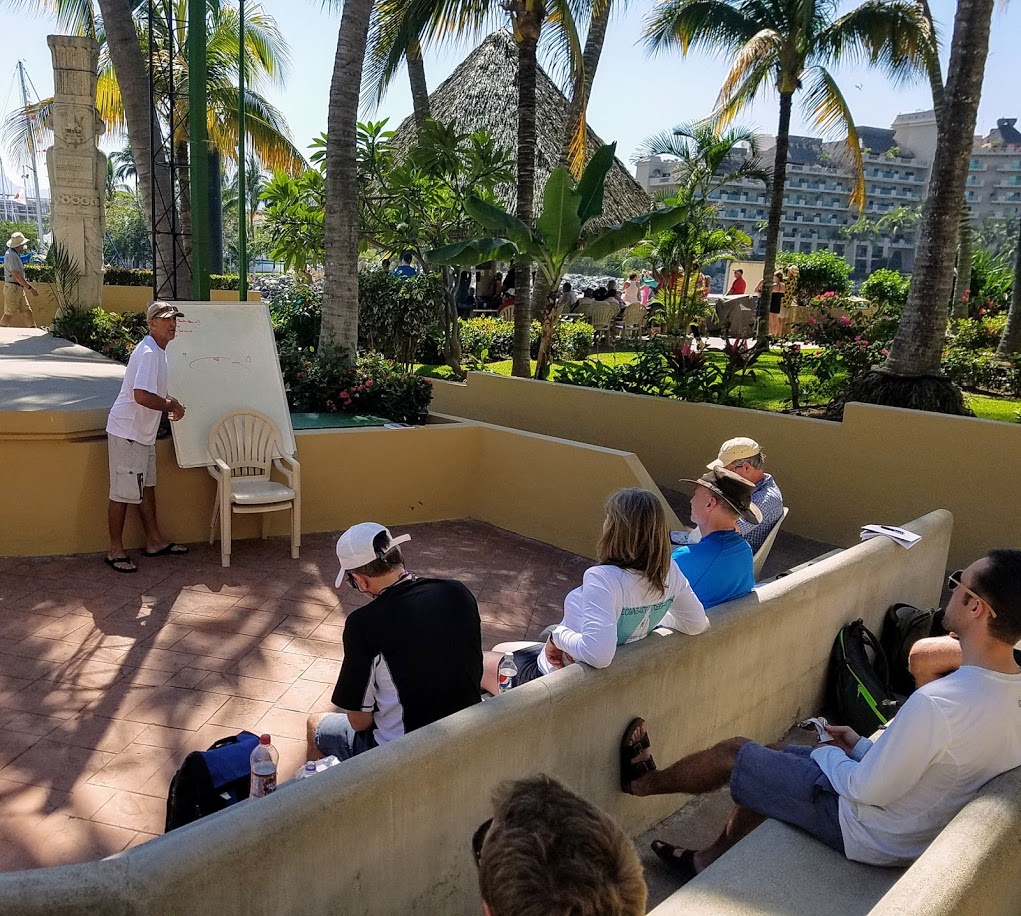 In my intro post, I acknowledge the craziness of transitioning from Dragonfly to a J/99. Recognizing this, I made a Grand Plan!

As part of my Grand Plan, I started searching for some professional training. After looking at several schools in Eastern and Southeastern US, and looking at my work travel schedule, I decided something on the West coast would be best.

And with the date of the non-refundable decision deposit coming soon for the J/99, I decided sooner in 2019 would be better.

I ran across J/World Performance Sailing in my searches and after a few conversations, I set my sights on their Bandaras Bay Regatta program. Three days of training and three days of racing J/80s in beautiful Bandaras Bay off Puerto Vallarta, Mexico.

I’m happy to report the venue, people, and program were fabulous!

The format is nine students are partnered with three J/80s and three instructors. There is a chalk-talk each morning as the local thermals build, then a few hours of sailing out in the bay to work on the day’s lessons. Each of the three students on the boat switch off positions to make sure to learn tiller, main trim, and foresail trim/foredeck. The instructor pitches in as asked as only three crew makes for a busy J/80.

After the three days of training, it’s time for the final exam. This comes in the form of the annual Bandaras Bay Regatta, a three-day race that’s been a fixture of the local sailing community for years.

The first race day was the light wind day and our skipper for the day was a heavy-wind sailor from San Francisco. We had a decent start, but ended up in a wind shadow. And while we were not that far behind at the first mark, we struggled to find the wind and sail fast.

Day 2 was windier and we were sailing a triangular course. Between the second and third marks was a long reach, but not really beamy enough to launch the kites. Our boat led the parade to the third mark as all boats eyed each other closely to make sure nobody was going to pop the kites early.

Because we had a decent lead, we kept edging up higher than the other boats — willing to give up a little of the lead to gain height on the other boats. Our strategy was to get high enough so we could pop the kite ahead of the second mark and accelerate away from a fleet who was sailing too close to the wind and lay line to risk the kite.

This worked great until our spin halyard seized in the sheeve with the kite only 3/4 up the mast. After a lot of struggle, some of which made us almost miss the mark, we were able to get the kite back down. We rounded in a very close third place, but despite some pretty fine wing-on-wing VMG effort on the downwind leg, we reached the leeward mark in third place.

On the second lap, we caught up to the other boats and made the tough decision to try and get the kite up again. No go again, so we limped home wing-on-wing amid building seas.

The other two crews swapped were 1-2 and 2-1 to our 3-3, and on Day Three it was my turn to drive. The day dawned beautiful, but the wind was up. So, the guy with the least high-wind experience (me) was at the helm in 15-20 knots.

We led at the start and never looked back. It was another triangle course and we essentially repeated the strategy from the prior day. We led at the first mark and worked our way higher on the reach. This time, the other boats didn’t let us get quite so high.

When we thought we could reach the mark under spinnaker, we oh-so-stealthily popped the kite and looked back expecting to see scrambles on the other two boats to match our strategy.

Nope. They had their spins up and filled.

Then came an amazing downhill ride with building surf and winds above 15 knots. At one point, we got the J/80 up on plane and I was so excited I very nearly lost the boat to a roundup. Only quick thinking by a crewmate blowing the vang kept us dry-side up.

This rattled me a little and I had a hard time getting back in the groove. Two more near-broaches later, and I was WAY too far in my head.

The course had a final mark about 100 yards past the finish line, setting up for a quick douse and upwind sail into the finish. My bobbles and some amazing sailing from the boat behind — plus an inopportune wind shift — had us close at the mark. Not worrisome, but not the comfy lead we once had.

We round the mark and all the sudden I’ve got a NFS cruising class boat in my face — on starboard. They were coming from the opposite side of the committee boat and I never saw them.

We had to dodge and then I couldnt find the damn wind. We limped across the line with the J/80 behind charging hard. The horn sounds twice in quick succession and…

… nobody on our boat has any idea who won. I was sure I’d blown the lead, which made for a very, VERY long sail back into the dock.

We get back to the dock and the other team thought we had them. The third place boat thought we got beat.

So we roll to the award ceremony and collected our 3rd place Regatta trophy. They didn’t announce the results from the day’s race, though, so some 5 hours after the race I STILL wasn’t sure whether I blew it or not.

I couldn’t stand it any longer and I walked over to the PROs table, apologized profusely for interrupting his dinner, and asked him who won.

It was a big weight off my chest when he finally found the right page among all the regatta documents and told me our boat crossed the line first.

This was an amazing experience with a great group of sailors. The instructors were top-notch and the format was fabulous. I’d encourage anyone to give the J/World team a shout and take one of their racing classes.