Except for the One Thing… 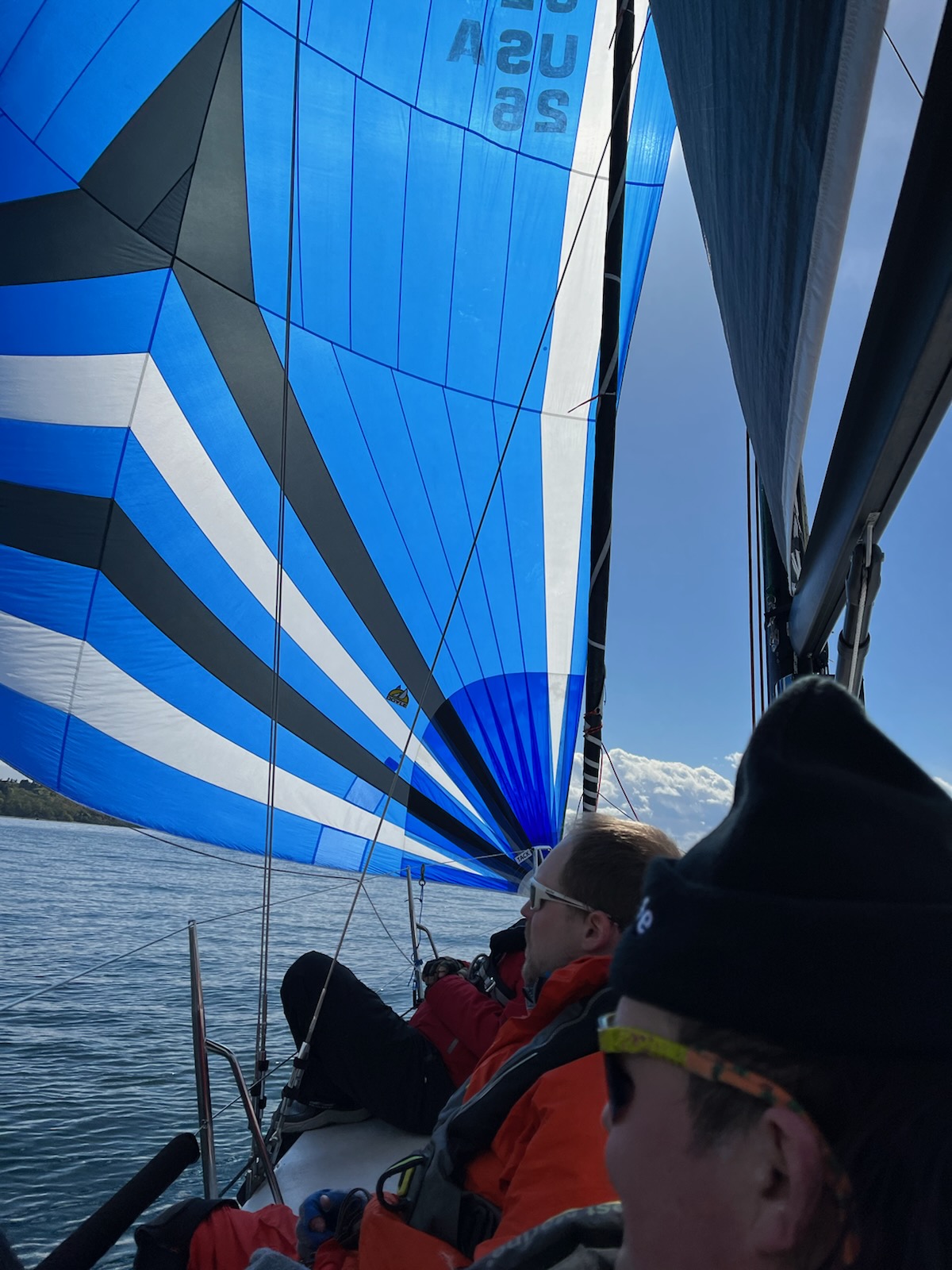 The One Life racing program seems to be at the point now where we are getting dialed in on boat speed in even light air conditions — a significant issue early in the program as those who’ve been following along are aware. The pessimist in me would say this leaves us exposed to other things to put us in back part of the class. The not-pessimist in me would say we’re at the stage of the program where, on any given day, we can be towards the front of the class. On those days where we are at the back of the class, the post-race debrief often comes down to one common theme:

“Except for the One Thing, we had a great race.”

Honestly, I’m ecstatic to be at (or at least near) this stage of the program. There were days when I’d have to start borrowing toes to count problems because I ran out of fingers. I’m sure those days will still happen, because we’re humans dealing with a surprisingly complex sport, but lately we’re closer to using one finger to address issues in the debrief than all the fingers and some toes.

The CYC Center Sound Series was a good example. The race 1 “one thing” was we sailed the boat too fast and ended up sailing a longer course due to not enough point. Race 2 we solved the problem and did very well. Race 3’s story starts with an innocent enough decision to begin with, but one we let get too far out of hand and it cost us a our chance at the podium.

We were doing well with good boat speed and great point. We were staying close to our competition, precisely like we wanted. We got to and around the Scatchett buoy in good shape and made the right call afterwards to stay west. We got ourselves into a bit of a wind hole at one point, but quick reactions got us out of it with no damage.

A southbound container ship was closing on the fleet, and we made the call to get across in front of it towards the east side of the course. We didn’t want to have to deal with the potential of needing to tack out of the wind hole we saw ahead of us and not being able to due to the container ship.

This was, we all agreed in the post-race debrief, the right call. Once we cleared the lanes, however, we decided to keep going to the east side of the course because we believed there was better wind.

As it turns out, there was better wind over there. Unfortunately for us, the wind also filled in on the west side soon thereafter and then shifted west significantly and stayed there. We went from being in exactly the right place to falling down the rungs of the ladder quickly with zero chance to do anything about it.

The One Thing preventing us from a great series was diverging too far from the fleet. We made a smart tactical decision to clear the container ship, but didn’t consolidate the move. We instead leveraged ourselves out to the opposite side of the course and that leverage bit us in the ass. It wasn’t like we needed the leverage. Our strategy in the race was stay close to the higher-rated boats and let the PHRF level things out. Separating from the fleet for leverage is something you consider when you’re way behind in standings, not when you were a point off the podium going into the race. I forgot that and was more concerned with finding more breeze than sailing in enough breeze along with our class.

Otherwise, it was a great day. The crew did a great job, as they had for the entire series. For CSS #3, we ended up crossing 6th in class. Congrats to Great Blue Heron who had a great race and crossed first, catapulting them into 3rd on the tiebreaker.

Dos took the series, with Elusive in second, GBH taking third on a tiebreaker with Eclipse. We ended up fifth, just one point back.

Yet another ‘unsettled’ wind forecast greeted the seventy-two (!) boats registered for STYC’s first big race of the year. For thos readers outside the PNW, strong Pacific westerlies offshore create a convergence zone as those winds split around the Olympic Mountains and then recombine over Puget Sound. Weather forecasts are particularly challenging here because a one or two degree difference in the angle those offshore winds hit the Olympics shift the convergence zone in Puget Sound dozens of miles north or south.

This one started with your’s truly taking a gamble to a crowded pin end start and getting rubbed off on the pin and having to circle back… only to not have a enough room on the second run at the line and fouling Irie. Kudos to them for falling off and not forcing me to take the big steel ball of the STYC starting pin down the side of One Life. As soon as Darkside cleared us to windward, we did another turn to erase the penalty.

[Update: One turn was not enough.]

Fortunately for us, this wasn’t actually the One Thing deciding our fate this race. The winds were twirly swirly enough we’d caught back up with most of our class — including with Fortuna, the boat who had a great start and pinched us off at our first run at the line (to my shouted congratulations to them at the time!).

The big tactical decision in this race was to try and dash across to the west side for current relief from the long ebb this day and hopes for better wind or to stay east. We chose to stay east and were rewarded as the wind mostly stayed with us and many boats got caught out in the middle with a strong ebb and no wind.

Before West Point, we navigated some tough winds with the entire crew — but particularly main trimmer/co-tactician Morris — doing a great job of picking winds lanes where we should and shouldn’t go. The crew was doing perhaps the best job of any race on One Life yet of tracking who was moving and who wasn’t, and collectively we kept ourselves moving.

We finally headed across towards the Rocks when the wind filled from the south and started shiftin SW. For most of the leg across the traffic lanes, we were laying the Rocks with no need for any tacks.

When the wind shut off not too far from the Rocks, and then shifted to due west, we tried to take a page out of our Freshwater race experience and launch the spinnaker to take advantage of the 2-knot westerly. It went up in a terribad mess, largely because by that time the back of the boat had asked the foredeck to shift its launch side at least twice by then.

And that was the One Thing for this race. It wasn’t that the chute went up in a tangle of spinnaker sheets, it was the fact I didn’t tell them to drop it down on the deck immediately when it was clear it would not be an easy fix. We sat there trying to undo it and ended up working the boat into irons. The wind had also shifted back south by that point, so once we got it untangled we couldn’t have flown it anyway.

That One Thing disconnected us from the fleet. It delayed us from rounding the Rocks. Where the rest of the fleet got 20-30 minutes under spinnaker after rounding the Rocks before the winds shifted back to the north, we got 10 (maybe). That pushed us even farther back so when the convergence zone re-appeared over Shilshole, we got caught in the shutoff at Meadow Point. We rounded in a very light northerly, popped the kite, went about 400 yards, and a brisk southerly filled in.

While we weren’t DFL in our class, we were 7 of 9 and didn’t look near as good as Jeri Ryan in doing so. Congrats to Dos for taking tops in the class, and second overall. Eclipse and Elusive rounded out our top three in class. And thanks again to Irie for being good sports all around in dealing with our foul at the start.

It was a beautiful day on the water, however the standings ended up. And with all the good folks I have on my crew that made for an enjoyable day.

We’ll get those ‘One Things’ cleaned up, I have no doubt. Until then, well, The Shirelles had it about right.

1 thought on “Except for the One Thing…”