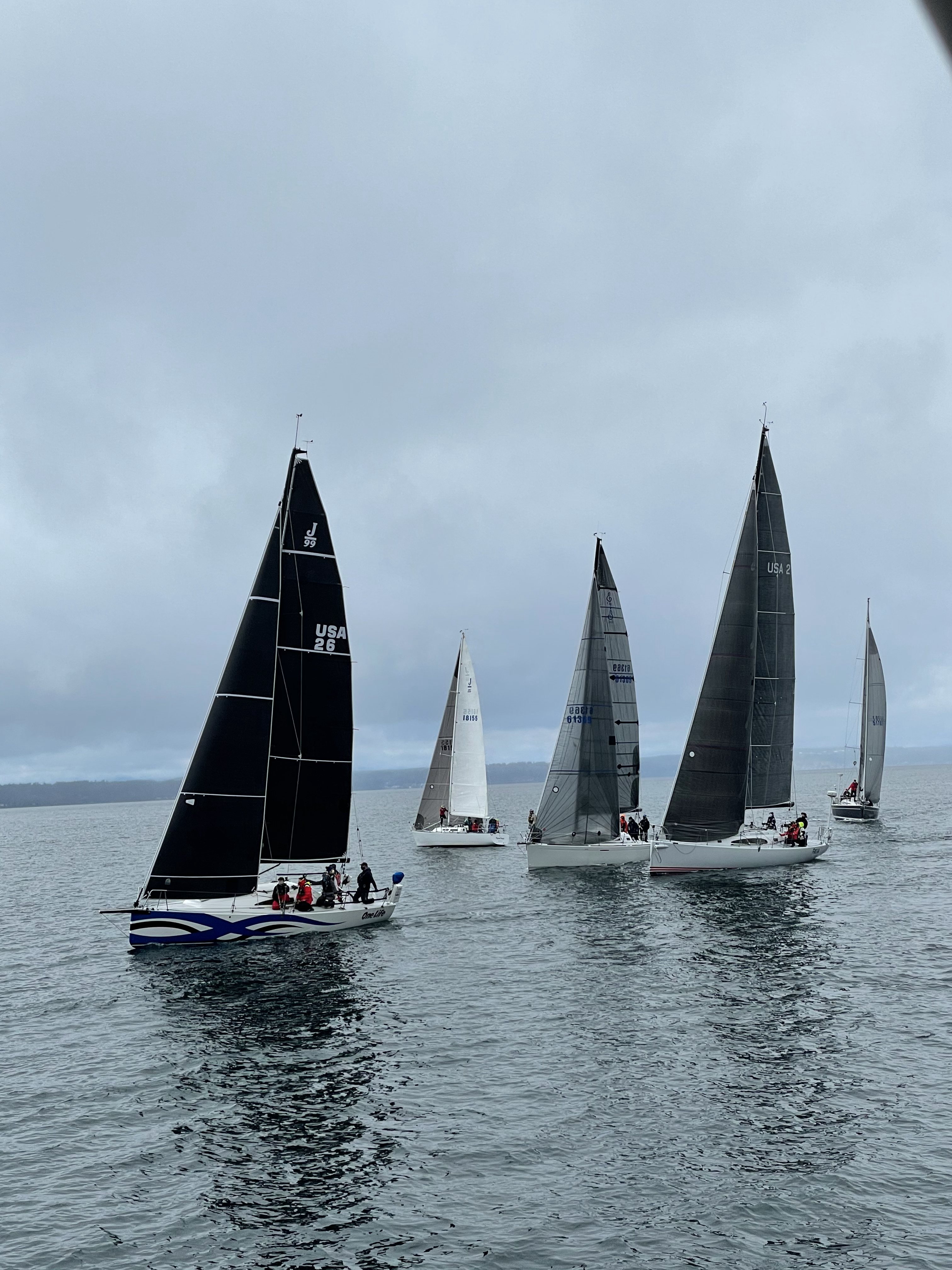 The last race of the Snowbird series coincided with the first day of Spring here in the northern hemisphere (Thank Goodness It’s Spring, in case you were wondering about the title). It also came after an evening of understandable celebration for some of the crew and the resulting hangover (Tip to all you new Seattle sailors and a reminder to all you out-of-practice old hands out there: Nobody ever has just one drink at The Sloop.)

The forecast was all over the place, literally. The wind direction on the forecasts looked as if the apps gained sentience then became entranced with a spinner toy. Wind direction aside, they all agreed the wind would die down until a stronger system came in towards evening.

The Shilshole Yacht Club posted a NWMN2 race course, which was smart given the forecast. I don’t think anyone expected a second lap.

Our start was a decent one, with only one other boat ahead of us. We pretty much did what we wanted off the start, with the crew (despite some hangovers) performing well.

As expected, the wind died on the way back. As we were plodding along back north, we were surprised to see the first boats go through the finish line with no horn. At first, we though maybe the two boats through were continuing to practice. After a couple more, it was clear the race committee was sending us on a second lap.

Shortly after we hit the Meadow Point mark, the wind took a nap. We uncovered the BBQ and distributed some “wind seeking beverages” — none of which helped bring the wind back. Eventually, the wind went from omnidirectional to zero, so we were at the mercy of the currents.

There was wind outside, so those early start boats who managed to get through the start/finish and hit the current push to West Point were actually making headway as the back of the fleet just bobbed. J/105 Puff managed to coast across the start/finish line at one point, then drifted backwards across it again. We presume the race committee didn’t DQ them for that given the race committee made the decision to run a second lap into a dying wind forecast.

Our good friends on Aquavit were making a run at the line for a while with their immense underwater sail, but they stalled out too. Us? We just bobbed in a circle enjoying the brews, hot dogs, snacks, and the stories all were telling.

The wind filled in from the west to whole 2 knots, driving the northbound boats under spinnaker on their second lap. Once we realized they were running parallel to us with their spinnakers up — which, admittedly, took us a while longer than it should have due to more attention to the BBQ, beer, and stories amongst the crew — we managed to get the bow pointed the right direction and hoisted the spinnaker to get across the line.

Low/no wind days are always rough on the crew. Me? I’m almost always happy to tough it out for a few hours to see if the wind will come back. As the skipper, though, I also need to make my crew happy. While the hangovered folks were (mostly) recovered, I also know this was more a practice than a race for us. We’d only been in one other race in the series, so we had no urgent need to finish the second lap.

It just felt like the right decision to surrender once we crossed the line, so I made the call to the race committee. Shortly after we did, the rest of the fleet was rewarded with a nice breeze (you’re welcome!). We were rewarded with more food off the BBQ and some additional adult beverages while resting comfortably at the dock.

It was a good day on the water. We had some new crew on the boat, newish crew in new positions, and — honestly — just a great group of human beings aboard. I think we all enjoyed the day more sitting at the dock than we would have worrying about the next wind shift in a 3-5 knot breeze. And more to the point, I think the relaxed vibe of the day did more long-term good for the crew than if we’d had spent another hour or two on the race course.

No regrets whatsoever calling it a day. After we got the boat put away and everyone headed for home, I got to spend some quality time with One Life puttering around below and washing her topsides. Kris came down with the Kindles, arriving just before the rainstorm. We buttoned up the hatches, turned up the heater, and spent a cozy afternoon curled up below reading good books and listening to the rain on the roof.

The evening ended with brews from Cloudburst Brewing and yummy Asian fusion food from the adjacent “Plenty of Clouds – Dump Truck” food truck. If you’re looking for something different near the marina, grab a 4-pack of a wonderful brown ale from Cloudburst called “Not Interested” and pick up an order of pork mala noodles (one order is big enough for two) and a side of the sichuan pork dumplings. You can thank me later for the fabulous food and beer pairing!